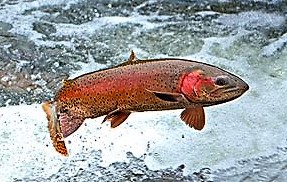 Bozeman decided to name its new High School Westslope High, after the trout. Not everyone appreciates naming a school after fish. They must not be trout fishermen. Schools have been named after sharks, whales, and other unique fish but not trout. Here are some trout thoughts to consider. 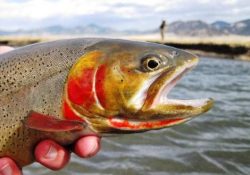 West Slope Trout are Local. The new high school is on the west end of town, in the western part of the state, and embraces the theme of “Go West Young Man!” Trout were also an important part of survival for native peoples and pioneers. Fish thrive in schools! Catching and releasing are activities needed in many sports.

The trout in question is also known as a CUTTHROAT! This is a tough and unique mascot name in the caliber of a Grizz, Bobcat, Panther, Rattlers or other local names. “Cutties” can kick some tail and rip some lips!

One legend of how the “Cutthroat” was named is that a native Chief was upset that a neighboring tribe was taking their fish. He had his warriors catch all their fish and mark them. They used knives to cut the throats of the trout and release them. Fish that could survive that, and centuries of evolution, must be tough. These trout are also beautiful, symbols of a clean and healthy environment, and a main reason that tourists come here to fish and support the economic wellness of Gallatin Valley.

Not such a bad name once you know the facts. No matter what the final high school name is, our students will make us proud. If you don’t like it then;