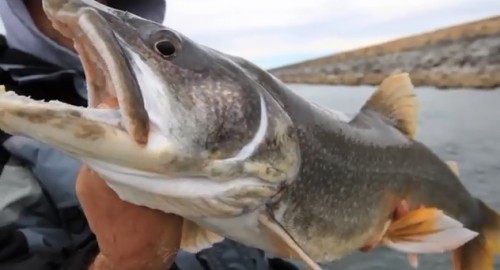 The fifth weekend of the 2019 Spring Mack Days Fishing Event on Flathead Lake ended on sunny Easter Sunday with 4,145 lake trout entries for the weekend. Friday there were 1,233 entries, Saturday the total came to 1,543, and Sunday’s total was 1,369. Total for the first five weekends is at 23,673. The 2018 Spring Event total after five weekends was at 21,406. There are four more weeks to participate in the event. Anglers can fish Tuesday through Sundays. Go to www.mackdays.com for information, rules, pickup times and places, fish ID, etc.

Mack Days are sponsored by the Confederated Salish and Kootenai Tribes and sanctioned by Montana Fish, Wildlife, and Parks. There is Up to $225,000 in Cash and Prizes that will be awarded at the conclusion of the event on May 19th. The fishing event is a tool that is used to reduce numbers of non-native lake trout in Flathead Lake and increase the native bull trout and westslope cutthroat trout. Trying to decrease the lake trout population is an important management strategy in the effort to increase numbers of native fish in Flathead Lake.

The $10,000 tagged fish continues to elude the anglers. He is lurking somewhere in the vast, murky, depths of the lake. Could he be at Rocky Pt., Yellow Bay, Delta, Mid Bar, Cat Bay, or Skidoo Bay? Does he move from 280’ to 120’ or does he stay in the same depths all the time? Every angler wishes he knew the answer to that question. To catch him would be a “kiss the fish event” again. Felix Gauci was happy to “kiss the fish” in the fall of 2014 when he found out he had the big tagged fish. Three-$5,000 tagged lake trout and five $1,000 lake trout along with over 9,000 with values from $500-$100 are also still in Flathead Lake. Fifty three tagged lake trout have been turned in so far during this event with values from $500-$100. Turning in $100 tagged lake trout over the fifth week were Kalispell anglers: Matt Guckenberg X 3, Larry Ludahl, Bob Turner, and Ken Varga, Larry Karper-Florence, Larry Ashwell-Missoula, and Dave Hoback of Arlee. Two lucky anglers from Kalispell Bob Stewart and Travis Banyai turned in $200 tags.

Jason Mahlen of Kalispell is continuing to build his lead over the other Top Ten Anglers in the event. His total of perfect 100 fishing days is at eight with his entries at 1,230 over fourteen days of fishing-many anglers were not able to get on the water the first day of the event because of the ice. Last spring after the five weeks Jason was at 1,154 with six 100 fish days and a final total of 2,208 which was a new record for the event. Kolton Turner another Kalispell angler is at 1,190 entries and five perfect 100 days. Bob Turner has 959 for third, David McDaniel-Polson-950-4th, Mike Benson-Lonepine-828-5th, Ken Varga-Kalispell-730-6th, Jerry Benson-Plains-730-7th, Tyler Varga-705-8th, Scott Mahlen-Kalispell-703-9th,  Matt Guckenberg-584-10th.

Larry Karper of Florence is one of the skilled 70 & Over anglers with many years of experience. He is in the lead with 306, 2nd-Larry Ashwell-Missoula-272, 3rd Gary Perleberg-Bigfork-237, 4th John Gauci of Florence with 137, 5th place Ralph Johnson of Columbia Falls with 28.

Matt Guckenberg Jr. of Kalispell in the 13-17 Category has 340 to lead. Second is Leah Banyai-Kalispell with 249, 3rd-Abby Hodgson of Kalispell-20, 4th Wyatt Thompson of Bigfork with 5, and Emmett Ludahl of Kalispell has 4.

Julie Perkins continues to lead the lady anglers with 348, Leah Banyai has 249, Debbie Paine of Polson is 3rd with 71, Connie Jones of Kalispell is 4th with 64, and Lisa Cloo of Missoula has 47.

The second day of the Bucket of Fish was on Saturday. Anglers in a boat put their four heaviest lake trout under 30” in a bucket for a weight.  Winning bucket came in at 29.25 pounds from the Paine/Nelson team of Polson, 2nd Dwayne Whitaker of Kalispell with 21.6, 3rd Krogstad/Perkins of Kalispell with 21.2, Perlebergs of Bigfork were in 4th with 18.5, and the Smith/Johnson team were 5th at 16.1. The third and final bucket day will be Sunday May 5th. Placing will be on the total of overall points after the final day. Anglers will be hoping to have their catch of day be right under 30” and four of the same would be a fisherman’s dream.

The smallest lake trout category has two new entries. Jerry Benson of Plains turned in a 146mm (5 ¼”)   lake trout on Sunday and Kent Lowe of Polson had a 145mm lake trout on Saturday. There is still no large lake trout entry. The large fish has to be over 36” and over 24#’s to qualify.

Come out and enjoy lake trout fishing on beautiful Flathead Lake. All it takes is one fish to be entered in the lottery drawings for cash and prizes. Make your dream of catching the big one-largest fish or $10,000 fish-happen. Fish on!