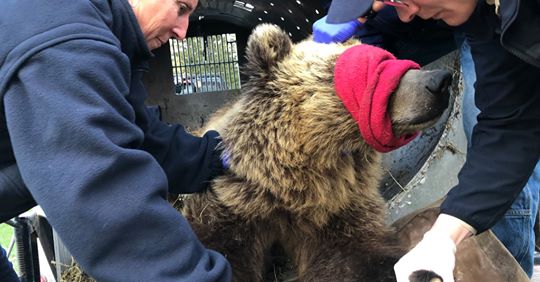 The reports are available to read online at http://fwp.mt.gov/regions/r1.

The reports, prepared by FWP bear and lion specialists, provide an overview of management work, conflict response and prevention, monitoring, mortalities, public outreach and more in 2018.

Last year, FWP received over 150 calls related to grizzly bears in and around the NCDE portion of Region 1. Of those, most were classified as bear conflicts. Most reported conflicts involved unsecured food attractants, such as garbage, chest freezers left outside, pet food left outside, bird feeders, chicken feed and fruit trees.

“The best way to minimize conflicts between people and grizzly bears is to prevent conflicts from occurring in the first place,” Manley writes in his report.

In 2018, Manley and Vallieres helped install 18 temporary and permanent electric fences. An additional 13 electric fence energizers and net fences were loaned to landowners. Manley, as well as other FWP staff, also presented at several educational and outreach events throughout the year promoting bear awareness and safety.

Last year there were 23 captures of 20 individual grizzly bears in the NCDE portion of Region 1. All but one of the captures occurred on private land. Four of those bears were euthanized. Bears are moved are taken to an approved site with permission from the landowner or land management agency. The decision to capture or remove grizzly bears for management reasons is not made without careful consideration.

In northwest Montana, many areas with the highest densities of lions are also areas with expanding human population, Wenum notes. This is related to the concentration of deer and elk in their winter and summer ranges at the edges of the valley. Thanks to outreach and education programs, the number of lion conflicts has slightly decreased through time.

Last year Annis received 109 bear-related calls. Of those, 47 were confirmed human-bear conflicts (both species), which is down from recent years. No bears were captured, relocated, or euthanized due to confirmed conflicts in 2018 in the CYE.

Unsecured garbage continues to be the primary cause of human-bear conflicts, Annis said. Domestic fruit trees and small livestock were a close second.

Temporary electric fencing was used at 20 locations as the primary tool to resolve conflicts in 2018 in the CYE. Annis helped an additional three residents with permanent electric fences to secure small livestock. Of the 180 electric fences set since 2009 in the CYE, only two have proven ineffective at eliminating a conflict with a bear, according to Annis. One, in 2017, was due to a flaw in the initial design of the fence. The other, in 2015, involved black bear cubs of the year willing to take a full jolt from a well-designed electric fence to access a fruit orchard.

Annis continues to work with Lincoln and Sanders counties to secure the public waste transfer sites and make them bear-resistant. Since 2017, a combination of chain link fence and electrified wires were installed to secure several sites, and these measures have proven 100 percent effective at preventing bears from accessing garbage. She also regularly participates in community outreach and educational events to promote bear awareness and safety.

Northwest Montana is home to abundant populations of grizzly bears, black bears and mountain lions. Bears are active from springtime through fall before winter denning. FWP encourages the public to “Be Bear Aware” and take precautionary measures to work, recreate and live safely in bear country. This includes removing or securing food attractants and carrying bear spray. Safety and conflict prevention information is available on the Montana Fish, Wildlife & Parks website, fwp.mt.gov.

For a list of educational events in the region, visit the FWP Region 1 Facebook page. Residents can call FWP regional offices to learn more about wildlife or to report bear or lion activity. In northwest Montana, call (406) 752-5501.