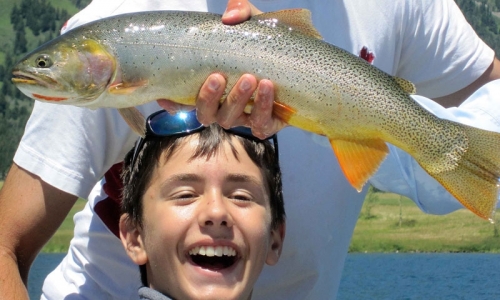 Bitterroot Lake
Jigging seems to be best this time of year. Random depths from 40-180 ft of water about 8” off the bottom. Troll with planer boards closer to shore.Flathead River
Opens Sat the 18th for General Fishing Season. All three branches are running clean and green! Fly fishing – use Prince Nymphs or Olive Scuds for your wet flies. Try a Royal Coachman for dry flies.

Ashley Lake
Decent Salmon right now. Jigging in 15-30 ft of water. Use Hali in a white glow with corn and maggots to conceal hook.Blanchard Lake
Focus on structure like weeds, rock piles or timber to target Bass and Pike. Pike are hitting well off jerk baits. Crappie bite is slow, but will take off with warmer temps.

Echo Lake
Bass have been tricky to catch this past week. Be ready to try different styles of fishing for success. Try fishing slow and low in the morning and mid-level crank baits later in the day.

Hungry Horse
Cutthroat action is doing well right where the many creeks run in the main body. Use Panther Martins for Mepps in gold combos. For flies, try using a Hair’s Ear or an Orange Scud.

Lake Mary Ronan
Thanks to Walleye Unlimited for the new dock extension at the State Park! Perch have been slow but will pick up quick with warmer temps.

Thompson Chain
Good Pike action being reported, but nothing large. Use a good Perch pattern Rapala. Perch are being caught both shallow and deep.

Smith Lake
Fun lake to take the kids Pike fishing. Black and Orange spinner baits should be the ticket. Also try using a swim jig with a small paddle tail.

Swan Lake
Pike fishing has been good for some on the North End. Use frozen bait on a pike hanger rig under a bobber. With a second pole, use a Red/White Daredevil and jig/retrieve in an aggressive manner.