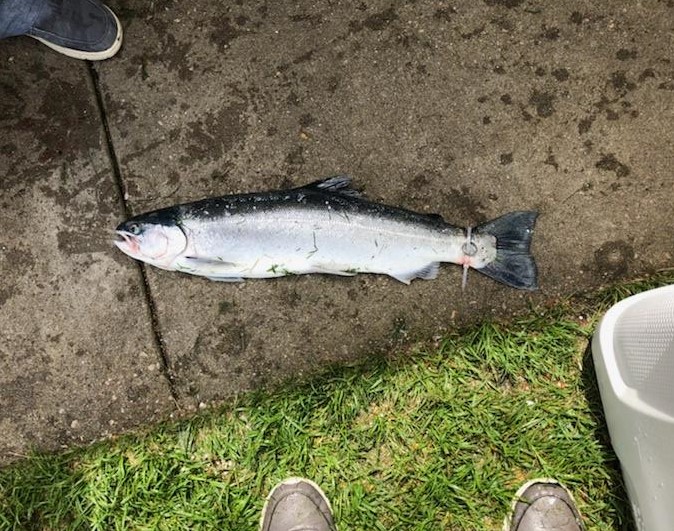 The “Cursed” Ring that Resurfaced on a Steelhead
By angelamontana

Imagine you’re fishing, and you catch a steelhead with a wedding ring ziptied to it….so many possibilities.  What are the odds that you find the person who did it?  Well, with the internet, pretty high!  Take a look at the first story below and then read the bottom one with the update.  Crazy.

Side note: please do not attach anything to wildlife or fish.

THE STORY – PART ONE: (click here for original story from Chicago Sun Times)

Jim Nelligan and friends were fishing Lake Michigan Friday when they boated a steelhead and, mystery of mysteries, a wedding ring was strapped around the narrow part of the fish by the tail.

“So, we caught this steelhead today,” Nelligan emailed. “Someone attached their wedding ring to this fish and we caught it. Wonder if it was a divorce or death, but a crazy story!’’

It didn’t take long to uncover how a fish found itself tied to a wedding ring. Here’s the story.

For the nitty gritty of the ring, Nelligan emailed, “Had an inscription of SDH Steel on the ring.”

Nelligan was fishing on his boat, “Grey Lion II,” by the R4, the famous buoy east of Chicago’s north suburbs. They were fishing for lake trout with four colors of leadcore line with a Blue Dolphin spoon in 105 feet of water. Joe Penar caught the fish with John Massard netting it. Bob Nichols was another crew member.

In other words, they were doing some normal June fishing when something completely abnormal happened.

As Nelligan put, “crazy story.” It’s the kind of crazy that leads to imagining tales.

I imagine a guy at Wrigley Field calling over a roving camera crew while he gets down on one knee and asks a young woman to marry him and she says no. Instead of hurling the ring far out into Lake Michigan, he decides it needs to be sent packing, symbolically, strapped to the tail of a cold fish.

Love lost, a wedding ring released and a steelhead recaught miles away on the other side of Lake Michigan. Sheez, there are so many pieces to the tale of the steelhead with the ring on its tail.

“I really just didn’t want to cause any issues with my ex, she seems to find the story somewhat amusing and none of us can believe someone caught it!’’ Capt. Jason Rosemessaged.

As a cathartic move, Rose tied his wedding band to a steelhead on May 4 and released it near the port of Whitehall, Michigan.

Of all improbabilities, the steelhead was recaught Friday, June 21, by a group of fishermen aboard Jim Nelligan’s “Grey Lion II” by the R4, a famous buoy east of Chicago’s north suburbs. They were fishing for lake trout with four colors of leadcore line with a Blue Dolphin spoon in 105 feet of water.

Joe Penar caught the fish with John Massard netting it. Bob Nichols filled out the boat.

“So, we caught this steelhead today,” Nelligan emailed Friday. “Someone attached their wedding ring to this fish and we caught it. Wonder if it was a divorce or death, but a crazy story!”

“Yeah, lost love,” Rose messaged. “I was married for the better part of a decade. My ex wife and I decided to go our separate ways.

“I am a fishing guide, she was always against me following my dreams and hated how much I fished.

“Four years went by since our divorce. I felt I needed to get rid of that ring but I didn’t want to just toss it to the bottom, pawn it or any of that kind of thing. So I released it the best way I know how.

“I am convinced that ring is cursed,” Rose concluded. “My life has been nothing less than great since I released it.”