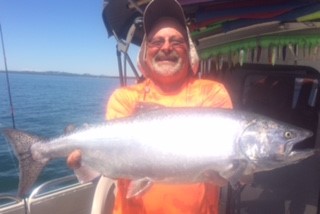 Ashley Lake
Reports of decent sized Salmon jigging in the early mornings and late evenings. Use a glow white and orange Hali jig tipped with corn and maggots. Focus your depth around 15-20ft if you don’t have sonar.

Blanchard Lake
Use heavy punch type lures to get through the lily pads. Bass will be using the pads as cover. Also try top water frogs in the early morning. Look for Crappie towards the South end suspended. Use Pete’s Crappie Candy and Cactus Jigs

Fennon Slough
Reports are good for all species. Look for Bass in heavy structure. Perch will be in or near weed beds along with Pike. Pike have been biting on swim baits and a 3/8oz jig head.

Flathead Lake
It has been another great week for the Lake Trout. Most Lakers are suspended, while other are on bottom around 80ft of water. The T50 Red/White flatfish pulled behind an 8in flasher. Whitefish bite is really happening down in Elmo Bay in 50ft of water. Caroline Point and the Delta have been hit and miss. Try 40ft in these areas.

Hungry Horse Reservoir
Good numbers of smaller Cutthroat. Try trolling a Hoochie Mamma behind a dodger about 15ft below the surface. Spin Cast a rainbow or red pattern Rooster Tail. Good flies to use around the creeks are Irresistables.

Koocanusa
Great reports of Salmon being caught from jigging. Pay attention to sonar for depths. Jig with an orange/white Hali tipped with maggots.

Lake Mary Ronan
Decent numbers of Perch in 14ft of water. Use an 1/8oz jig with leeches. Troll for Salmon towards South end using a Classic Wedding Ring and dodger.

Thompson Chain
Good fishing throughout the chain. Decent Perch and Pike on Lower. Middle is great for Perch and Salmon. Lots of smaller Perch in Upper.

Smith Lake
Lots of small Pike being caught from the dock. Use black and orange spinner baits for best action. Also, a Vibrax Spinner is good to have.

Stillwater
Perch fishing has picked up and size is improving. Leeches or worms work best with a green or pink jig head in 8-12ft of water. Look for thick weed beds with small openings.

Swan Lake
Reports of decent Pike towards the outlet. Use fire tiger crank baits. Salmon bite has slowed some but best early morning.