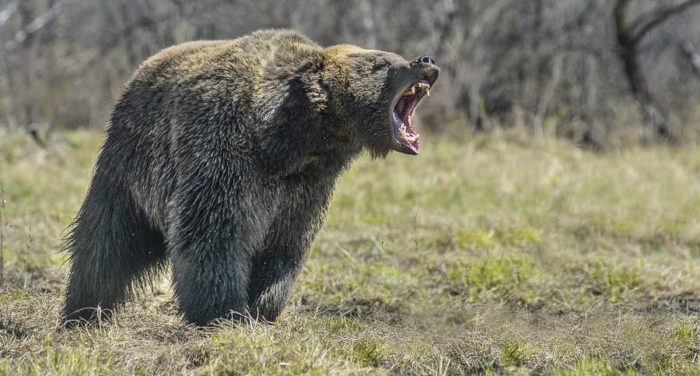 Running into a Grizzly Bear is just dangerous. These Huge Wild and massive predators are unpredictable. These bears are engaged in a feeding frenzy as the Fall becomes Winter. Hunters could be on the menu.

Fall means gut piles and critter carcasses. Hunters leave tasty delights for the bears. These carnivores become conditioned to the sounds of gunfire and game calls. Last bow season, I called in 3 male Grizzly bears after bugling for elk. They expected to see an elk and so did I!

Be Bear Aware! Know what kinds of bears are in your area. Both Blacks and Grizzlies have different threats and characteristics. Both can kill you! Learn about their behavior, sounds, and sign and the best way to prevent encounters.

Bear spray and guns are the standard carry for bear protection. A shotgun with slugs will also do the job but is a bit larger. If you end up in the situation where you need either means that you made other mistakes. Close encounters can be prevented by being alert and aware. Hunt with a partner!

Bears smell. When hunters are heading into the wind, most can identify the smell of a bear, kill site, or elk. Bears also make different noises than deer and other critters. Ravens and other scavengers will also stack up on kill sites. When you see, smell, see sign, or hear, these signals, avoid the area.

If you encounter a Grizz, stay calm. Slowly back away and do not make eye contact. I also talk calmly and softly to the bear. Make yourself big by standing on a rock or log. Hold your bow and protection high. Watch the bears behavior and back up. Bears will swat the ground, growl, or maybe even make a bluff charge. Stay calm. I have been within 20 yards of bears several times and have yet to spray or shoot. Slow and easy is the plan. What I haven’t encountered is a mama and her cubs. If you end up between the cubs and Mama, consider climbing a tree, or get ready to shoot. Back off if you can but time is a factor. Protective bears are aggressive and fast. You will not outrun a bear.

If the bear attacks, use your gun or spray. I have seen bears blow through spray. Guns will only work if you make a kill shot. The final kill shot may have to be under the bears chin. This means that the bear will probably be on you.

Practice with your Bear Spray or gun. Wheel guns are my choice. Guides that I talk with carry the hottest 357 Cal. Round they can get. This caliber is fast and heavy. Revolvers rarely fail to operate. Semi auto handguns can fail or jam. Bears have thick hides and skulls. Big bones and muscles are also an issue. Even when wounded, bears rarely give up easily. 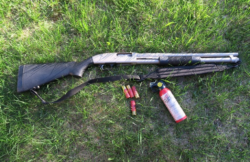 An attack happens quick and you only get off one or two shots at best. Accuracy is critical. Big flat head bullets that do not expand will penetrate and break bones very well. You will probably be shooting at the head, mouth, or chest.

Everyone has their own suggestions. Some are practical, some are not. The truth is that most bears fear humans. They will head in the other direction if you give them a chance.