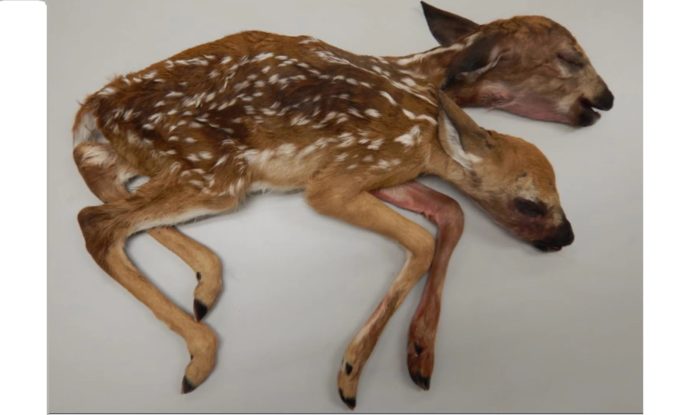 In May 2016, a Minnesota man was hunting for mushrooms in a forest near the Mississippi River when he stumbled upon something a little more unusual than fungi. Nestled dead in the underbrush was what looked like a single newborn baby fawn, carrying two heads on one body.

The baby deer was actually a pair of conjoined female twins with a body about 23 inches (60 centimeters) long from tail to heads. Their body was patterned with the telltale spots of other white-tailed deer and appeared to have been recently groomed. Yet the fawns lay alone, dry and freshly dead on the ground with no signs of their mother in sight. [Photos: See the World’s Cutest Baby Wild Animals]

The mushroom hunter delivered the deer to the nearby Minnesota Department of Natural Resources, knowing he had discovered something remarkable. Now, a new case study published in the April issue of the journal The American Midland Naturalist explains just how remarkable the conjoined fawns truly are. According to the new study, this discovery marks the first documented case of two-headed white-tailed deer twins brought to full term and birthed.

Even though this didn’t happen in Montana, apparently, it very well could have!

Read the full story at LiveScience.com.