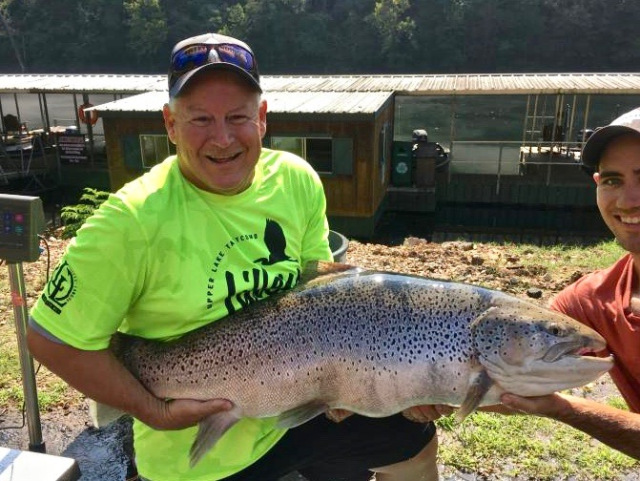 A fishing guide who decided to go fishing on his day off wound up catching a German brown trout that was just short of a world record but shattered the Missouri state record.

Bill Babler of Blue Eye was fishing Lake Taneycomo on Wednesday when he landed a 40-pound, 6-ounce brown trout only a few minutes after starting to fish, according to the Springfield News-Leader.

The Missouri Department of Conservation confirmed the catch as a state record on Thursday.

The fish was only 1.69 pounds under the world record of 42 pounds, 1 ounce caught by Otwin Kandolf in New Zealand in March 2013. But Babler’s catch easily surpassed the previous state record of 34 pounds, 10 ounces caught from the same Lake Taneycomo by Paul Crews in February.

“As soon as I set the hook it came to the top and I knew we had a good fish on,” Babler, who used a Berkley PowerBait worm to make the catch, told the Springfield News-Leader. “We positioned the boat in an unobstructed area. It was pulling drag pretty good.”

Using a 7-foot custom-made rod with a spinning reel loaded with only 3.6-pound test line, Babler brought the behemoth brown to the boat where his friend netted it. The fish promptly ripped through the net.

“It landed on the carpet in the bottom of the boat,” Babler told the Springfield News-Leader.

Shane Bush, a fisheries biologist with the Missouri Department of Conservation, weighed the fish on a certified scale at Lilley’s Landing Resort and Marina.

Read the full article by David Strege on the USA Today website HERE.