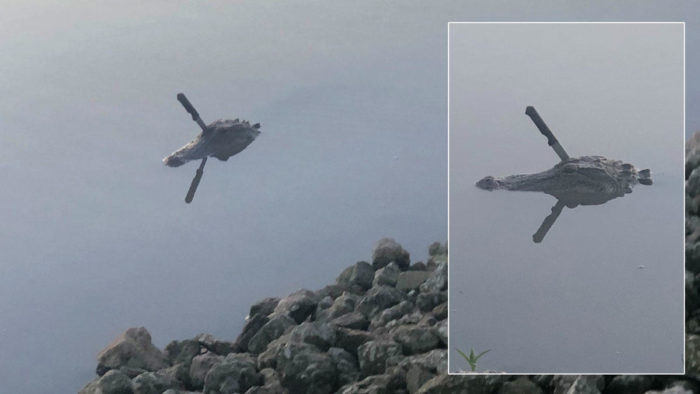 Alligator Spotted with Knife in its Head
By angelamontana

Imagine you’re at the ocean just enjoying the sound, the view…soaking it all in.  Then, something catches your eye–and it’s an alligator.  That’s fine, because you expect to see alligators where you are, but there’s something different about this one.  It has a knife stuck in its head.

Well, here’s an article posted on ABC13 from June:

Families inside Orchard Lakes Estates in Fort Bend County are angered and upset by a recent alligator sighting.

Their anger is not because of the animal’s demeanor or size, but because it appeared to need help.

Residents stated there are gators all over the place in the area co-existing with humans, so this has become quite the issue in the area.

“Almost every morning I see them,” said Weaver, who has lived here for six years with no concern for the wild animals. “Never have I seen them aggressive or even defensive, if you walk by and startle, them they just go under water.”

“I feel that somebody did this on purpose,” she said. “I can’t imagine this animal going after somebody that they would have to defend themselves, because we’ve never had that happen before.”

Weaver and her neighbors are hoping to find aid for the animal soon, saying, “I want to get help for this alligator, I don’t want to see an alligator swimming around with a knife in his head and suffering.”

The Fort Bend Co. Sheriff’s Office reported that they can only take a report once “a deputy witnesses the hurt animal”.  In addition, Texas Parks and Wildlife was contacted and a warden was expected to be headed to the area, also.

However, Superintendent Chris Bishop with the Brazos Bend State Park stated that gators are resilient and infection resistant and is pretty sure this gator is not in pain and could continue living like this for some time.

Click HERE for the full story from Shelley Childers with ABC13