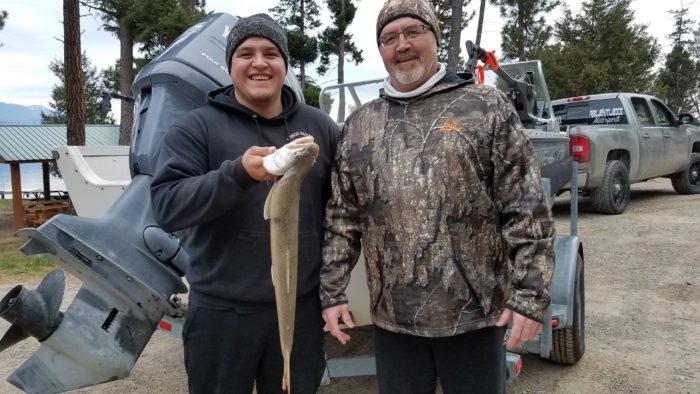 Anglers have turned in a total of 10,372 lake trout entries in the 2019 Fall Mack Days Fishing Event sponsored by the Confederated Salish and Kootenai Tribes. Up to $150,000 in Cash and Prizes will be awarded at the conclusion of the event on November 10th. There are many ways to win in the event. Catching one lake trout to be entered gives you a chance to win in the lottery drawing that begins at $1,000 and goes to $400. Maybe it will be a tag fish winner. Tagged fish have values from $10,000 to $100. The $10,000 lady lake trout Marie Laveau is still out there. She is known to be hiding in a hollow log with one eyed snake and a three legged dog (not in the lake). Maybe you can catch her or one of the three $5,000 or one of the five $1,000 tagged lake trout. There are also over 9,000 tagged lake trout with values from $500-$100. Several tagged lake trout were turned in during the fourth week.

Nikko Alexander of Arlee is the first lucky angler to hook onto a $500 tagged lake trout. It is the first $500 tag turned in during this event. His first time fishing the Mack Days Events with friend John Malatare was a good fishing day for him. He also put 20 tickets in the lottery drawing.  $200 tagged lake trout were turned in over the fourth week by Julie Perkins-Kalispell X 2, Bob Hereford-Missoula, Bob Christensen-Missoula, Kieran Incashola of St. Ignatius, David Mack-Helena, Everett Young-Plains. $100 tagged fish were turned in by Scott Bombard-Missoula X 2, Bill Swaney-ND, Roger Schiff-Whitefish, Brad Ivanoff-Arlee, Everett Young, Kim McMillie-Polson, Amber Powell X 2 out of two entries-Big Arm,  David McDaniel-Polson, Roger Poole-WA with 2 entries also, and Bob Hereford. It could be your turn to catch a tagged lake trout.

Perfect 100 fish days were turned in by Scott Bombard and Felix Gauci X 2. It is a hard day at the office/lake to catch 100 lake trout in one day. Anglers say that the fishing has to be good and equipment has to work well.

No “catfish” were caught this week. Bob and Bobbi Hereford report that they have received calls from several sources from Washington to New York City about their catch of the bobcat last week. This week Bob was focused on the tagged lake trout.

Julie Perkins continues her lead in the Ladies Category with 330, Laurie Kreis of Huson-62, Gina Schiff of Whitefish-51, Kim McMillie-37, and Lisa Cloo of Clinton-35.

Matt Guckenberg Jr. of Kalispell still leads the 13-17 Category with 8, Tayven Moua of Missoula has 3. The 12 & Under leader is HD of Arlee with 14, 2nd Darien Moua of Missoula-7, and Kieran Incashola has 6. These young anglers are the future and the reason to preserve native fish species in Flathead Lake.

Anglers are halfway through the eight week-long event. There are four weekends left to compete. All you need is one fish to qualify. Entries continue to be taken until the last day of the event and there is no entry fee. Go to mackdays.com for information or telephone 406-270-3386.

Be weather minded when out on the lake. Ramps are icy in the early mornings-they are very slippery. Have all safety equipment on board. Weather over the fourth weekend was beautiful for most of the days. There were a few rough times but then would became calm again. These events are used to reduce the numbers of the non-native lake trout and increase populations of native bull trout and westslope cutthroat trout. The events are a management tool used by the fisheries program. Come out and be part of increasing the native fish populations for future generations.

Flathead Lake is the place to be. Fish on everyone!