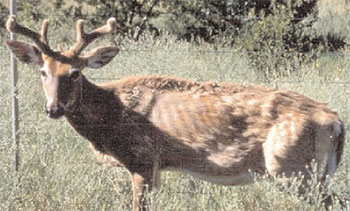 CWD CLOSING IN!!!
By Montana Grant

A new CWD infected critter has surfaced for the first time. Recently, a moose was shot near the Pulpit Mountains, west of Quartz Creek, and north of Troy, was confirmed to be infected. 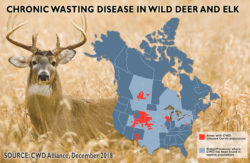 The location was less than a ½ mile from the Libby CWD Management Zone. 30 deer have turned up positive in this area, but never a moose. Recently, an elk has also been found infected with CWD.

Another threat is Bovine Tuberculosis. This bacterial disease has also been detected in Montana. Six game farms had diseased animals in the 1990’s. Infected deer were found in Park, Sheridan, Richland, Granite, Big Horn, and Carter counties. This disease also can infect many other types of wildlife. This disease is spread by direct contact, inhalation, and droplets expelled from infected lungs. This happens when critters are concentrated over bait piles or feed sites. There is evidence of at least one case where this disease infected a human. No vaccine is available. To eradicate this disease would impact all wildlife populations and cost millions of dollars.

CWD is a fatal disease that impacts the nervous system of whitetail and mule deer, elk, and moose. Each year, more infected critters have been identified. Things are not improving.

Research does not support any transmission to humans, livestock, or other hosts. New research is showing that infected wildlife is a concern. As more areas, and animals become infected, the future could be a future challenge for hunters.

It is important to have your meat tested in affected areas, before consumed. The MT FWP will do the tests. Make sure that the meat you feed your family is healthy. 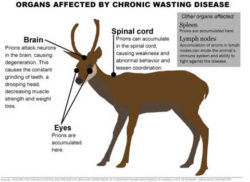 If you ever have a wild critter that just does not seem right, have it tested. Other diseases and issues are surfacing. Wildlife populations and domestic populations are rarely completely compatible.

CWD seems to have encroached into Montana from central Wyoming and north/ central Canada. In many areas, game farms, and private wildlife sanctuaries, seem to be an issue, or at least the source.

Professional butchers are experienced at recognizing tainted or infected meat.

When in doubt, check it out!

For more Montana Grant, check him out at www.montanagrantfishing.com.