Hypocrisy in and Upside-down World (with Colonel Smoothbore)
By angelamontana

Let me begin with full disclosure, I am a Lifetime member of the National Rifle Association, in my case, a Patron member, and I am damn proud of the work we have done since our founding in 1871. Currently there have been a few kerfluffles at the NRA. The ongoing controversies are fodder for discussion in an upcoming column. However, in this missive I want to address some of the nonsense that passes for public sector policy that is intended to spread a sense of virtue by “doing the right thing.”

Recently, the San Francisco Board of Supervisors, the city’s legislative body, declared the National Rifle Association a terrorist organization. One of the board members, District 2 Supervisor Catherine Stefani wrote the declaration which in part stated that the NRA, “spreads propaganda that misinforms and aims to deceive the public about the dangers of gun violence. “It said the NRA “musters its considerable wealth and organizational strength to promote gun ownership and incite gun owners to acts of violence.” (Emphasis added) The declaration also said, “All countries have violent and hateful people, but only in America do we give them ready access to assault weapons and large-capacity magazines thanks, in large part, to the National Rifle Association’s influence.” Here is a quote from a recent Newsweek article, “City Hall passed the resolution unanimously and called on the city and county of San Francisco to take every reasonable step to limit … entities who do business with the City and County of San Francisco from doing business with the NRA, according to SF Gate.” This obvious 1st Amendment violation caused the NRA to sue and as a result, the Board of Supervisors backed down, a clear victory for the NRA and freedom of speech.

I have been a NRA member for decades and never once has anyone associated with the NRA advocated violence in any form to me nor can I find any evidence, to anyone else. During my time as a NRA member I have read thousands of articles that originated from the NRA and published in NRA periodicals. Daily I receive emails from NRA divisions that detail not only news concerning 2nd Amendment issues, but also issues regarding the Constitution and the freedom and liberty we all enjoy. I have never received an email urging violence on any level. I hold 10 NRA instructor and coach certifications and I along with tens of thousands of NRA trainers, instruct nearly 1 million students each year in the safe use, and ownership of firearms. We work to save lives, not end them. The City of San Francisco’s declaration is nothing but one big LIE and, I believe, an attempt to obfuscate the incredible failure of the city to enforce the rule of law and protect its citizens.

There are hundreds, maybe thousands of homeless people living on the streets of San Francisco. Make no mistake, these are desperate people. People who suffer from alcoholism, chemical dependency and other addictions, and mental and physical illness. They live in filth, feces, and urine. Rodents, mainly rats, are repopulating the streets. Occurrences of communicable diseases, including typhoid, are becoming more common. Conditions are ripe for a return other pestilence, perhaps even bubonic plague. People shoot up drugs on street corners; needles abound, perhaps infected with deadly toxins. Businesses are failing because patrons refuse to run this gauntlet of human misery. Look at the photos included with this column and understand that in every one of those tents are people in need.

And what does the city of San Francisco do? It chooses to demean, denigrate, and disparage the over 5 million members of the NRA, people who work hard, pay their taxes, and respect the rule of law. Sadly, the situation in San Francisco now seems like it will only get worse. A new District Attorney is about to enter office and his approach to the problem can be summed up in a recent quote. “Crimes such as public camping, offering or soliciting sex, public urination, blocking a sidewalk, etc., should not and will not be prosecuted,” District Attorney elect Chesa Boudin promised. In other words, the chaos will continue for everyone and what was one of the world’s most beautiful cities will continue to decline. 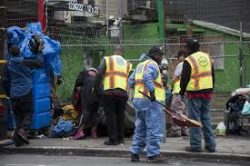 Recently, a massacre of American citizens occurred in northern Mexico. The murders were committed by drug cartel members. Let there be no doubt, these cartels are the real terrorist organizations and through its “sanctuary city” policy of protecting criminal aliens including cartel agents, the city of San Francisco is abetting cartel crime.

I don’t believe and would not accuse the people of San Francisco and its board of supervisors of being terrorists, they are not. But the policies of the city are utterly inane. Both the haves and the have nots of the city are suffering due to the utter hypocrisy and intransigence of its leaders.