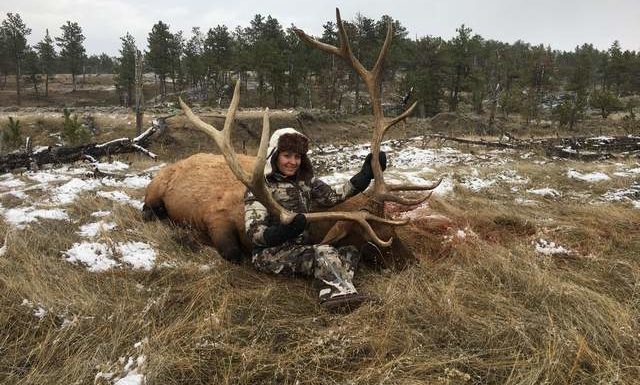 Montana Trophy Elk Down by Paraplegic Hunter!
By angelamontana

Aw – here is a fabulous story by writer Colin Gaiser on the Daily Interlake website! 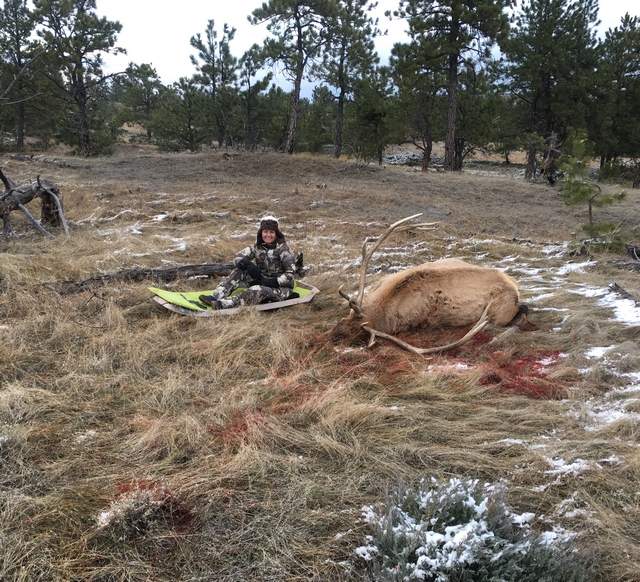 Annie Crone of Kalispell is paralyzed from the waist down, but on opening day of the 2019 hunting season she had an experience many able-bodied hunters spend years seeking out.

On Oct. 26, Crone bagged a bull elk on public lands north of Roy, in central Montana. It was a team effort with her husband and hunting partner, Jason Crone.

Jason pulled Annie on a sled for 1 1/2 miles – over hilly, rough terrain – to reach the elk they had identified from a distance. Jason was ecstatic for his wife and the adventure they had together.

“She got to experience what it is when you’re able-bodied to sneak in on an animal … and be successful in the type of hunt able-bodied hunters get to do all the time,” Jason said.

Pulling Annie on a sled was not the original plan. Jason – who is also a traveling professional bass angler – planned on riding a bike with Annie in their 4-year-old daughter’s pull-behind cart. But when they woke up on opening day and there were 3 inches of snow on the ground.

“The morning hunt didn’t work out,” Jason said, so he drove to nearby Lewistown and bought a sled – one meant for hauling game – that he could use to pull Annie through the snowy terrain.

In the afternoon, they drove their ATV to the top of a bluff and identified some elk in the far distance. That’s when the hard work began. Annie got in the sled, with an air-mattress pad for support, Jason tied a rope around his waist and they descended from the bluff toward the elk.

They were not on a road or trail, so it was “slow going,” Jason said, over thick grass and logs. Annie spilled out of the sled once, but she was laughing and was “all smiles” during the trip.

Eventually they found themselves 150 yards away from a grazing bull they’d spotted earlier.

Jason said the winds were howling – “a constant 20 to 30 mile-per-hour wind” – which helped them stay quiet as they attempted to set up Annie for a shot. He laughed as he recalled picking up Annie and doing a slow side shuffle to get her in place for a shot.

It took “about 15 to 20 minutes” to get Annie in a place where she had a clear shot at the bull. But when she was about to take the shot, another bull elk emerged behind the first one. Jason said he thought the second animal was a little bigger.

However, Jason suggested Annie still go for the first one, conscious of how much his quadriceps hurt from getting Annie in place and not wanting to pass up an incredible chance.