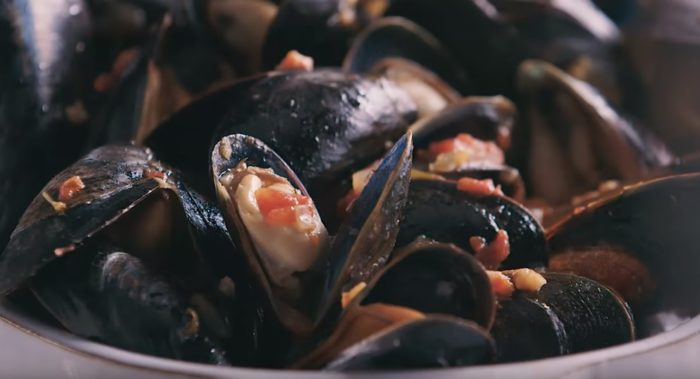 The Feast of the Seven Fishes is part of the Italian-American Christmas Eve celebration, although it is not called that in Italy and is not a “feast” in the sense of “holiday,” but rather a grand meal. Christmas Eve is a vigil or fasting day, and the abundance of seafood reflects the observance of abstinence from meat until the feast of Christmas Day itself.

Today, the meal typically consists of seven different seafood dishes. The tradition comes from Southern Italy, where it is known simply as The Vigil (La Vigilia). This celebration commemorates the wait, the Vigilia di Natale, for the midnight birth of the baby Jesus. It was introduced in the United States by Southern Italian immigrants in New York City’s Little Italy in the late 1800s.

The long tradition of eating seafood on Christmas Eve dates from the Roman Catholic tradition of abstaining from eating meat on the eve of a feast day. As no meat or animal fat could be used on such days, observant Catholics would instead eat fish (typically fried in oil).

While the first reference to the feast was seen in 1980s in The New York Times and the Philadelphia Inquirer, it is unclear when the term “Feast of the Seven Fishes” was popularized. The meal may include seven, eight, or even nine specific fishes that are considered traditional. However, some Italian-American families have been known to celebrate with nine, eleven or thirteen different seafood dishes. “Seven” fishes as a fixed concept or name is unknown in Italy itself. In some of the oldest Italian American families, there was no count of the number of fish dishes. Dinner began with whiting in lemon, followed by some version of clams or mussels in spaghetti, baccalà and onward to any number of other fish dishes.

The most famous dish for Southern Italians is baccalà (salted cod fish). The custom of celebrating with a simple fish such as baccalà reflects customs in what were historically impoverished regions of Southern Italy, as well as seasonal factors. Fried smelts, calamari and other types of seafood have been incorporated into the Christmas Eve dinner over the years.

There are many hypotheses for what the number seven represents. Seven is the most repeated number in the Bible and appears over 700 times.[citation needed]

One popular theory is the number represents completion, as shown in Genesis 2:2: “By the seventh day God completed the work he had been doing; so on the seventh day he rested from all his work.” During the feast of the seven fishes, participants celebrate the completion of God’s promise of the Messiah through Jesus.

Other theories include: that the number represents the seven Sacraments of the Roman Catholic Church; or it represents the Seven hills of Rome that surround the city.  It may represent perfection (the traditional Biblical number for divinity is three, and for Earth is four, and the combination of these numbers, seven, represents God on Earth, or Jesus Christ). (via wikipedia)

Here is a video with recipes for your Feast of Seven Fishes Christmas Eve meal:

And food is always better when you’re the one that harvested it!  Merry Christmas, folks!