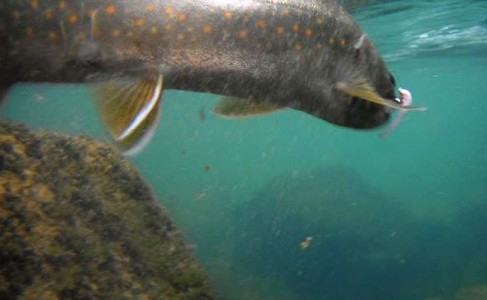 Kalispell, MT — The harvesting of bull trout on Lake Koocanusa is closed in an effort to improve the diminished population of the threatened species.

The Fish and Wildlife Commission on Jan. 6 approved a request from Montana Fish, Wildlife & Parks regional biologists to implement the closure while maintaining catch-and-release fishing on the large lake in Lincoln County. The closure will take effect March 1, 2020. Prior to the closure, harvest was limited to one bull trout per license year from June 1 through February 28 with catch-and-release fishing allowed the rest of the year. Anglers are required to have a Lake Koocanusa Bull Trout Catch Card when fishing for bull trout.

Bull trout are listed as a Threatened Species under the Endangered Species Act. Through special arrangements with the U.S. Fish and Wildlife Service, limited harvest has been allowed at Lake Koocanusa, Hungry Horse Reservoir, and a catch-and-release fishery is allowed in the South Fork Flathead River.

Due to the threatened status of the native species, FWP prefers to take a very conservative approach to bull trout management while still allowing opportunities for harvest when possible.

Bull trout redd counts in the fall are used as an important metric for measuring fish reproduction and recruitment and are included as part of the requirements for the harvest permit. For the Lake Koocanusa bull trout population, redd counts in Wigwam River in British Columbia and Grave Creek in Montana are important for determining harvest quotas. Over the past six years, redd counts had been fairly steady in both streams. In Fall 2019, spawning redds in both streams declined substantially, prompting concerns that limited angler harvest could have population-scale impacts.

FWP biologists believe it is appropriate to limit harvest until redd counts improve.

Bull trout are native to rivers, streams and lakes in the Columbia (Kootenai, Clark Fork, Bitterroot, Blackfoot, Flathead, and Swan drainages) and Saskatchewan River (St. Mary and Belly drainages) basins. Declines in bull trout abundance and distribution have been caused by habitat loss and degradation from land and water management practices; population isolation and fragmentation from dams and other barriers; competition, predation and hybridization with introduced non-native fish species (lake trout, northern pike, brook trout and others); historical overharvest; and poaching.