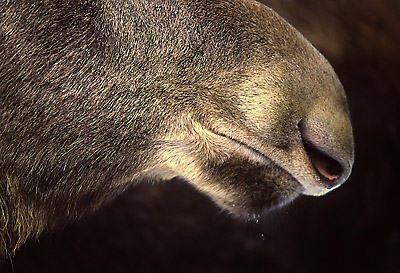 Moose stuck on ice for several days, euthanized by FWP
By angelamontana

A young bull moose that had been stuck on ice for at least three days on the Missouri River in Richland County had to be dispatched Tuesday by Montana Fish, Wildlife & Parks.

“It’s been three days,” said FWP Region 7 Warden Ryan Kasson. “We did what we could do, and let Mother Nature try to take its course, but unfortunately the moose didn’t get up.”

The moose was spotted earlier this week by citizens flying over the area in a helicopter. The animal was lying on river ice near the Snowden Bridge Fishing Access Site, about two and a half miles west of the Montana-North Dakota border.

Kasson was contacted, and the caller told him that a group of concerned citizens had attached ropes to the weakened moose and tried to help it stand. The moose offered no resistance, but soon it laid back down on the ice. So they dragged it off the ice to the shore.

Kasson opted to give the moose some time and distance to see if it would recover on its own. The landowner placed hay around the animal to help insulate it from the cold. By Tuesday, however, the animal’s condition had not improved.

Upon closer inspection, Kasson said it appeared the moose may have broken its front shoulder, but he hadn’t yet been able to confirm that.

In situations like this, options are very limited, and the most humane approach is to dispatch the animal. If the moose cannot stand, it is unable to obtain food or water to regain strength. Likely, it would grow weaker and eventually succumb or become a target for predators. There are no facilities in Montana that rehabilitate ungulates like moose due to disease concerns.

The animal will be tested for disease, including Chronic Wasting Disease, which affects deer, elk and moose. If it is disease free, the meat will be donated to the food bank, Kasson said.

FWP recommends that people finding animals on the ice or in similar predicaments keep their distance and contact the agency. Incapacitated wildlife can still be very dangerous to anyone approaching them. FWP staff are trained to respond and assess the situation. To report an incident, please contact the FWP regional office in Miles City at 406-234-0900.