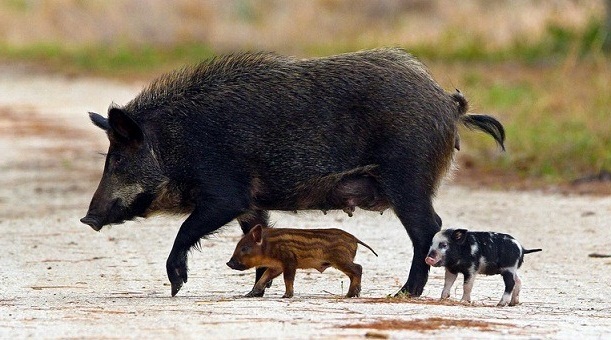 The Pigs are coming! Montana could become the 39th state to have a Pig Problem! It has taken over a century, but it looks like “Porkers” are at our Canadian doorstep.

Maybe the Big Bad Wolf can make quick use of them. A Wolf Swat team that would target these unwanted porkers could be handy. They could huff and puff… you get it.

Hunters reactions are predictable. Where, when, and how many can I tag. The FWP’s reaction is the opposite. They want to trap and study them. “Let’s make choices once we have the Science!” Didn’t the other 38 states do some research?

It reminds me of the Python problem in the Everglades. A Science Research Facility, in South Florida housed 1,000 snakes. A hurricane leveled the Science Center and the snakes slithered away. They then began to “study the problem”. It was thought that nature would take its course and our relatively cold weather would kill the snakes. Like in Jurassic Park, “Nature finds a way!” Today, a decade or so later, nearly half a million pythons, up to 18 feet long, are eating every bird and mammal they encounter.

Feral pigs were brought to the New World by the Spaniards, or maybe the Vikings. Since then, they have made themselves to home. Today, exotic game farms allow feral pigs and other critters from around the world to be hunted on there fenced property. Of course, the fences fail and guess what happens next? This trail also leads to CWD infected deer.

Truth be told, the pigs are already here and spreading. They will begin to damage crops, habitat, spread disease, feast on fawns and eggs, and attack people and other critters soon. Did you see the movie Old Yeller? Time for a bounty or at least some tags that hunters can squeal over!

For more Montana Grant, find him at www.montangrantfishing.com.