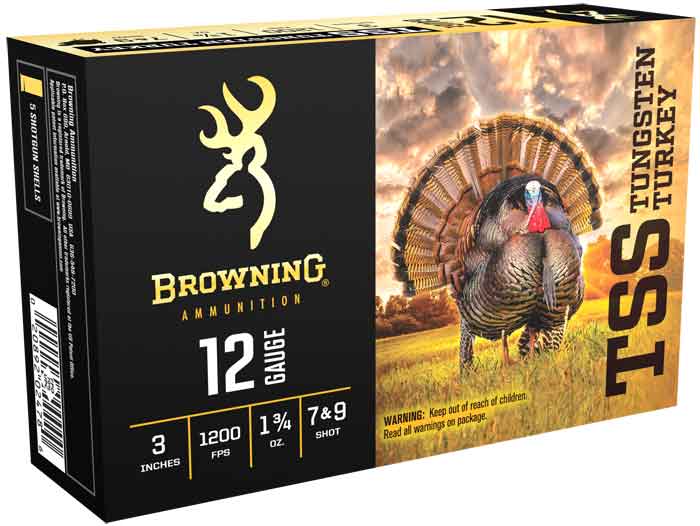 As the sun came up, I was calling several turkeys from their roost. Two were huge gobblers. I used a tree call to start the show. When I sounded out, they were gobbling their brains out. When I cackled, the whole crew flew out of their roost, and landed in front of me at 80 yards.

My decoys were at 20 yards. The flock of turkeys paraded in front of me for half an hour. The gobblers were in full display. My gun was on my knee and ready to rock but… the gobblers were just too far!

This is when I wish I had a shotgun load that could reach out just a bit further. I site my shotgun in for 30 yards. Shooting a bird much further kinda takes the sport out of the shot. Spring gobbler hunting is about bringing the birds in close. Calling is as much fun as shooting. But, after an hour of watching these 2 huge birds’ parade just out of range…

Browning has just come out with a solution. Their new TSS Tungsten Turkey loads could do the trick. A heavy and accurate load is needed. The shot in these new loads is made from Tungsten. This more environmentally friendly metal has the density and ballistics to seal the deal. These premium shells have the range and knockdown power needed. They are made I 12, 20, and 410 gauges. They are in 3- and 3/12-inch shell sizes. These shells hold more pellets than standard lead shells.

I know that the sport is about shooting close, but I still have dreams about those two HUGE gobblers just a bit too far.

For more Montana Grant, gobble him up at www.montanagrantfishing.com.