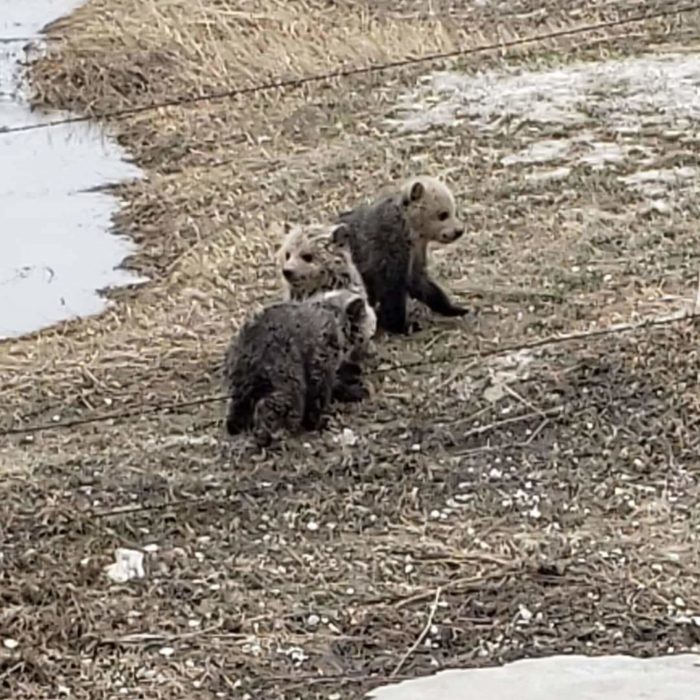 With the help of an area ranching family, three grizzly bears were rescued and taken to the Montana Fish, Wildlife and Parks’ wildlife rehabilitation facility at Montana WILD on Saturday.

The cubs were from a sow that was involved in a surprise encounter with a hiker near Dupuyer on Wednesday evening. The sow, which was shot and injured by a hiker, was euthanized by FWP on April 9.  At the time, it wasn’t clear how many cubs she had, though it was thought she had at least one.

Three days later, on Friday evening, the family spotted three cubs in a nearby field. The cubs were huddled up together and playing. The family called FWP to report the cubs. While waiting for FWP staff to arrive, the family grew concerned for the cubs’ safety because of a male grizzly that lives in the area and because of an impending snowstorm. The ranching family, being adept at roping, were able to gently rope the cubs and keep them in one area. A neighboring rancher offered a barrel in which they placed the cubs. When FWP staff arrived shortly afterwards, they took possession of the cubs and transported them to the wildlife center Saturday morning.

The cubs are still only nursing and the wildlife center staff immediately made a specialized formula for the bears.

FWP is working with U.S. Fish and Wildlife Service to find permanent placement for the cubs at an accredited Association of Zoos and Aquariums (AZA) zoo or facility. Grizzly bear cubs cannot be released back to the wild.

These cubs will be frequently handled for bottle feeding and will quickly habituate to humans. This would pose a significant human safety risk and drastically lowers their ultimate success in the wild.

Though it is still early in the spring, people recreating outdoors in Montana need to be prepared to encounter grizzly bears as they emerge from winter hibernation. This time of year, bears are hungry and looking for food, and often sows have cubs close at hand. Also, with bears expanding their population and habitat, they can often be found in prairie settings, well away from the mountains.

In Montana, people should be prepared to encounter grizzly bears anywhere in the western half of the state.