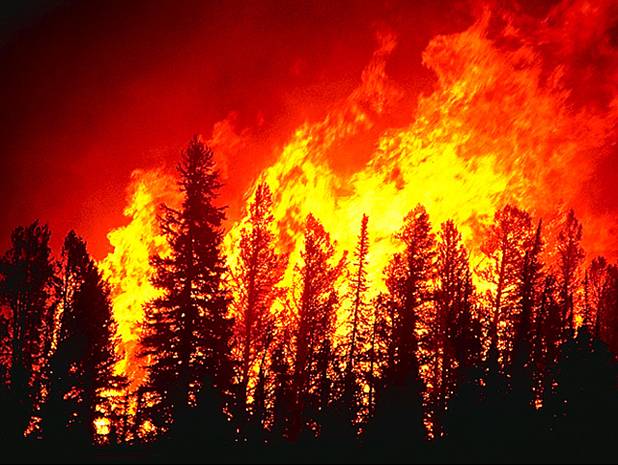 The significant wildland fire potential forecasts included in this outlook
represent the cumulative forecasts of the ten Geographic Area
Predictive Services units and the National Predictive Services unit.
National fire activity remained low in March as most regions were out
of fire season. Southern area received the most reports of wildfire
activity. Activity there was generally light and focused across Florida
and Oklahoma. Critical conditions were developing across California in
response to the dry, warm winter. A weather pattern change mid-month
to cooler and wetter than average conditions assuaged concerns. Drier
than average conditions persisted across most of the Great Basin and
Oregon. Those areas also experienced relief during the latter half of the
month. Other regions generally continued to experience average to
wetter than average conditions, including Arizona and New Mexico.
Mountain snowpack remained near to above average on the
Continental Divide, along the Canadian Border, and across the Alaskan
Interior. It was below average to well below average across the High
Sierra, Southern Cascades, Great Basin, Sawtooth Mountains, Kenai
Peninsula, and the Chugach Mountains. Snowpack melting rates will
need to be monitored closely in these areas. Drought development and
slight intensification was observed across California, Oregon, portions
of the Great Basin, South Texas and Florida.

Wildfire activity in April should continue to be light and focused in four
areas. South Florida has been extremely dry. Fuels are receptive. Pregreenup activity may occur during warm and breezy periods along the
Rocky Mountain Front as fronts pass. New Mexico begins to enter its
season late in the month. In Alaska, hold over activity from the previous
season can reemerge as the snowpack melts off. The potential for each
in April 2020 is not expected exceed what is observed typically, except
possibly in Florida.

May is a transitional period. Fuels in southwestern areas dry, and fuels
across northwestern areas enter peak greenup. The Southwest,
California and Alaska begin to more fully enter fire season while other
regions remain out of season. A normal transition into the Western fire
season is expected. Areas of concern will be the middle elevations
across much of California. In June and July, the West and Alaska enter
their peak seasons. Activity across Oregon and Central through
Northern California may be above normal. While overall Normal
significant large fire potential is expected across most of the Southwest,
some portions of the Great Basin and western portions of the Northern
Rockies may experience elevated potential and activity as well. The
Southwest and Alaska should transition out of fire season in July.

Past Weather and Drought
The ridge of high pressure along the West Coast weakened and reformed over the central Pacific Ocean
mid-month and allowed for a cooler and wetter pattern to develop. A series of weather systems moved
southeast from the Gulf of Alaska into the country. Overall storm tracks took the systems south along the
coast, on shore into California, and across the Southwest. Central portions of the Great Basin and the
northwestern portion of the Northern Rockies experienced drier than average conditions with generally
less than 25% of average precipitation falling. In the East, conditions were generally wet except across
Florida which was much drier than average. Interior Alaska received above average snowfall as systems
tracked east across the Interior and then southeast across the Panhandle. The Kenai Peninsula and the
Matanuska-Susitna Valley remained under the influence of a high pressure ridge and received below
average precipitation. Across the Great Plains, below average precipitation was received except across
Oklahoma and Central through North Texas which received above normal precipitation.
Temperatures across the country were generally 2 to 6 degrees above average except along the West
Coast, Montana, Wyoming and northern Idaho, where they were generally below average. Temperatures
across these potions of the West were generally 1 to 4 degrees below average. Across northern Idaho and
Montana, they were 3 to 6 degrees below average. Temperatures along the Gulf of Mexico coastline were
generally 3 to 8 degrees above average. In general, extreme departures from normal temperatures were
not observed in March.

March was a month of drought development and expansion in the West. By mid-month, most of Oregon
and California were experiencing Abnormally Dry or Moderate Drought conditions. A small area of Severe
Drought developed across southwestern Oregon. Drought conditions expanded north along the eastern
slopes of the Cascade Mountain Range into Washington State. A small area of severe drought
development was also observed in the Sawtooth Mountains of Idaho. South Texas experienced drought
intensification along the Mexican Border. Areas along the Gulf Coast experienced Abnormally Dry
conditions, including Florida.

Northern Rockies: Normal significant large fire potential is expected across the region during the outlook
period.
Very dry conditions have occurred across northern Idaho and western Montana during the past month;
virtually all these areas have had less than half of average precipitation. Fortunately, temperatures during
this time were generally below average, so little melting of mountain snowpacks occurred, and enough
new snow fell to keep SWE basin-average values in the 100-130 percent of normal range. This was due
to cool weather systems in strong westerly flow aloft favoring the higher terrain with precipitation, while the
valleys were strongly rain shadowed. Further east, a more nuanced pattern occurred across central and
eastern Montana, individual weather systems allowed scattered areas during this climatologically dry
period to receive above average precipitation (mainly snow), near other much drier ones. Temperatures
were generally below average across central Montana, but warmer further east. North Dakota was
generally much drier than average during the past month, with a large portion of the eastern half of the
state receiving less than 25 percent of average precipitation. Temperatures were also warmer than
average in North Dakota during the past month, except for the eastern third, reflecting the deeper, more
persistent snowpacks that remained in place there. Plains snow cover across central Montana to western
North Dakota melted off in late February but returned over most of that area during the past 10 days. Latest
drought monitoring shows small areas of abnormally dry conditions in western and central Montana, but
current monthly and seasonal drought outlooks keep the entire region drought-free through June.
Calculated soil moisture anomalies are slightly drier than average across northern Idaho, but well above
average from eastern Montana through all of North Dakota, a hold-over from the very wet late summer and
fall last year in those areas.

The NWS Climate Prediction Center outlooks for the April through June period depict the likelihood of nearaverage temperatures and near to above average precipitation over from central Montana east through
North Dakota. For northern Idaho and western Montana, above average temperatures and near to below
average precipitation is depicted. Given that the April monthly outlooks depict near average temperatures
and precipitation, this would imply a warmer and drier May and June period, which produce more enhanced
snowpack melting, faster lower elevation fine fuels curing, and dead fuel moisture drying. This generally
agrees with our internal Predictive Services monthly temperature/precipitation outlooks for the same
period, except for June. These internal outlooks also depict the possibility of warmer than average
temperatures in July for northern Idaho into western Montana, but with near-average precipitation.
Live vegetation is dormant region-wide, as is typical for this time of year. During the first half of March it
was snow-free east of the Continental Divide. From mid-March through the end of the month several storms
brought a return of some snow cover to eastern PSAs. So, fuel moistures are increasing there. Climate
Prediction Center (CPC) outlooks forecast average temperatures and near to above average precipitation
probabilities there. This provides moderate confidence that fuels conditions will not become extremely dry
for extended periods through the Plains pre-greenup season in April to mid-May and this would suggest a
healthy green-up without extreme dryness and drought stress through June.

In the western PSAs, snow water equivalent of 100 to 130 percent of normal persists in the snowpack.
Given a 30-day CPC outlook for near average temperatures in April, spring melt-off rates should occur at
average levels in April, but in May there could be accelerated snow melt-off rates due to warmer-thanaverage temperatures in the Western PSAs. This could lead to earlier drying in June in the dead fuels but
a healthy green-up and growth in the live fuels, given that drought stress is not anticipated, according to
the CPC Seasonal Drought Outlook. With the possibility of weak La Niña developing this summer,
warmer/drier-than-average weather could lead to lower fuel moistures in July.
The timbered areas of northern Idaho and western Montana with their complex topography, and stable
valley inversions are considered out of season for much of April. If May snowmelt rates are increased as
expected, the timing of fire season onset in those western PSAs could be earlier in June. Then in July if
weak La Niña develops with fuels dryness; this could combine with the typical monsoon thunderstorm
pattern for more ignitions than normal. At this time, it is too early to confidently forecast Above Normal
significant wildland fire potential for July due to the uncertainty. However, subsequent monthly outlooks
may reflect this possibility.

For the plains of central Montana eastward into North Dakota some years have more frequent extended
periods of warm, dry, and windy conditions and enhanced pre-greenup fire potential. This year there
appear to be adequate soil moistures, and this should preclude any rapid drying of fuels there. Thereafter,
higher relative humidity due to evapotranspiration during the agricultural growing season will maintain
enough moisture in the fuels there. As such, the period for April through July is expected to bring normal
significant wildland fire potential.