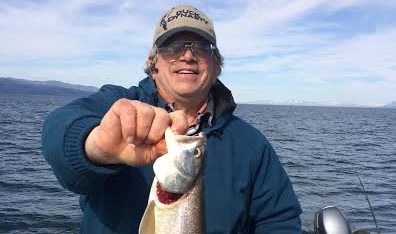 NW Montana Fishing Report by the Macman 4.26.20
By angelamontana

What’s happening in East Bay (East side of Polson Bay on Flathead Lake)?

It appears that we are closing in on the end of a perch cycle.  There is a huge number of incredibly large mature fish.  By large I mean they are consistently bigger per fish than I’ve ever seen in a lifetime of having fished there; 13” not uncommon.

Night crawlers on flies, smile hooks, or just bare hooks above a bottom weight are effective.

Last time out in an attempt to pick up the occasional small mouth bass that passes through, I included a Gary Yamamoto 3” watermelon colored Senko fished wacky on a jig head in my tackle.  It proved to be a very successful bait for those huge perch fished just over the edge of the boat’s gunwale.

Several things will create a scenario where fishing close to the boat will often be the best fishing. The shade offered by a boat in shallow water, the small pieces of bait that are lost close to the boat act as chum, as well as the fact that other perch will follow a hooked fish up to the boat.

Small mouth also have a tendency to seek the shade from a boat.

For those of you familiar with the spring perch fishing, you’ll find that the highest concentration of fish is toward the center of the bay further west than normal.

Because these fish are old and many of them will die before this time next year it makes sense to harvest as many as possible to avoid waste.

The powers that be have put a 10 fish over 10 inches restriction on us being ignorant of good perch management practices.

I submit that probably a million perch have been taken from the bay in the last 5 or 6 years and that the pressure that has been put on them as allowed the survival of enough small fish which are heavily cannibalized to ensure a continuing spectacular fishery.

Lake trout fishing has been good in the Yellow Bay area from a 200 to a 240 foot depth for the smaller best eating fish.  The Delta area at the North end has been producing many large lake trout and an occasional pike or bull trout.  Depths of 10 to 80 feet using a whole bait fish is most effective with a tube jig also offering good possibilities on a second pole.

The whole fish has also been taking some pike at the South end of Swan Lake.

Echo Lake is still giving up good catches of small mouth bass which have now moved into shallow water.