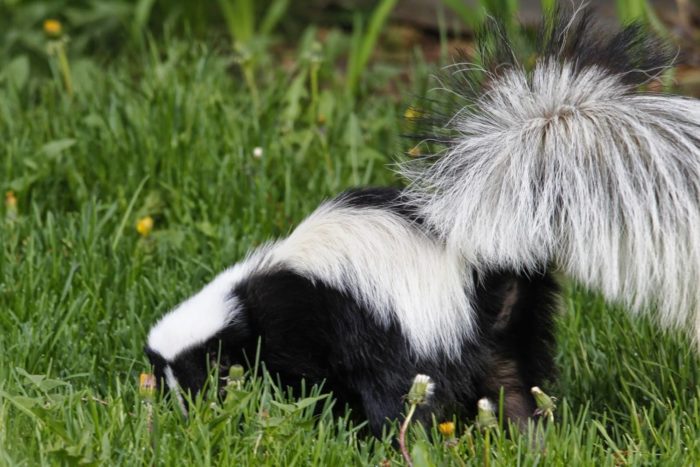 Skunk be Gone! (by Montana Grant)
By angelamontana

Unwanted encounters between dogs and skunks are way too common. Sadly, most skunks in Montana, and other states are likely to be carrying Rabies. It is essential that your dog have their rabies vaccination. Rabies can cause death/ Horses can get rabies when bit in the nose by a rabid skunk, fox, or raccoon. Most rabies is transferred through brain and spinal fluid. Skunks are often involved in many rabies cases.

Skunk /dog encounters happen without much warning. One day, while pheasant hunting in an alfalfa field, my shorthair pointer, “Coalby”, went on point. We were into birds and every previous point led to a flushing pheasant. As we moved into to flush what we thought was a bird, out popped Mr. Skunk! Coalby immediately grabbed the skunk and was sprayed. She dropped the skunk and backed off quickly. We dispatched the skunk. Later we dug a hole and buried the skunk a few feet deep and covered it in large rocks. This way, no other animal would get rabies from the carcass.

The dog was sprayed in the face and flank. PU!!! I immediately leashed her and took out my water bottle to flush and wash out her eyes. If you have regular eye wash, that would help as well. We drove home with the windows down, despite transporting Miss Stinky Dog in her kennel. The human nose can pick up Skunk Stink a mile away. It is best to let the stink dissipate and cure for a few hours. The smell will also begin to dissipate. You will also start to get used to the Pepe Le Pu fragrance.

Keep the dog outdoors. Whatever the dog rubs against will absorb some stink. Transport them in a towel or sheet to minimize transfer of the smell. Later you will need to also clean and de-stink the kennel and any other collars and gear. This means bleach and strong cleaners.

Once home, I mixed up a batch of Skunk De-Stink Juice. 1 quart of 3% hydrogen peroxide solution, 1/4th cup of Baking Soda, and two tablespoons of concentrated liquid soap. You can add the mix to a sprayer and thoroughly spray and bathe the dog. Repeat if needed. This mix is basically an oxygen generator that causes a foaming chemical reaction.

Wear rubber gloves to minimize transference of any stink. Depending upon the size of the dog, you may need a double batch. Coalby was 65 lbs. and I used a double batch. Use the mixture immediately. The needed reaction does not last long. Dump out any left-over mixture. If you leave it in an enclosed container, it will eventually explode.

Mix the formula in a large bowl. It will foam and boil up like crazy. The mixture generates oxygen which will react with the Thiols, that cause the smell. This mixture only works when it is fresh and will not store well. You could carry the ingredients separately in your dog support gear just in case. This De-Stink Juice also works on clothing, car seats, carpets, kennels, and cats.

The odor from skunks is caused by “Thiols”. Also known as “mercaptans”, Thiols are organic compounds that contain Sulphur. Skunks carry 3 different thiols. Each individual Thiol does not have a recognizable smell. Once combined, they produce the explosive stink that we are so familiar with. To De-Stink your dog, you need to chemically break down the thiols with a chemical reaction.

It is important to use the Skunk De-Stink Juice before you use anything else. Shampoos, tomato juice, vinegar, vanilla, and even plain water will “set” the skunk smell on the dog and make it harder to remove. Once the dog is bathed with the De-Stink Spray, let it set for 10 minutes then thoroughly rinse. This method will remove the stink faster than any other method that I am aware of. I have tried commercial products with limited success. Wear a rubber suit and gloves if you have them, to avoid stink transfer. Eye protection is also a good idea. You may need to rewash your stinky pet for several days until the stink is completely gone.

Traditionally, there are other remedies for Skunk Stink removal. Pioneers would start a fire with burning, smoky leaves and wave the dog over the and through the smoke. This was not pleasant for the dog or people, and just changed the smell. Not a great solution.

Washing the dog in tomato juice or diluted vinegar, vanilla, or shampoo does not work. This is an Old Wives Tale. If a human is sprayed by a skunk, you were told to wash with carbolic soap and water, tomato juice, or vinegar. Tomato juice and vinegar are acids. It was thought that Skunk Stink was an alkaline substance and the acid would cancel out the stink. Not true. Use the De Stink Formula as a spray or paste to clean fabric, rugs, kennels, or skin. Move the smelly pets into their portable crates for a few nights. They, and their stink will not be welcome indoors.

My vet said that dogs that encounter skunks and porcupines fall into two classes.

I asked a reputable dog trainer how he breaks a dog from going near skunks and his solution was traumatic, but he said would work. He would place a dead skunk and the dog into a sealed barrel and roll it down a small hill. The fear from smell, dark, rolling, and confinement would leave a memory that the dog would never forget, and avoid the smell in the future. This is certainly a hard thing to do, but having your dog getting rabies, infections, or other damages from skunk encounters are worse. I am not sure if I would do this but…

The Algonquin Indians named the “skunk”. It translates to “urinating fox”. Perfect!

Pepe le Pu would be proud.