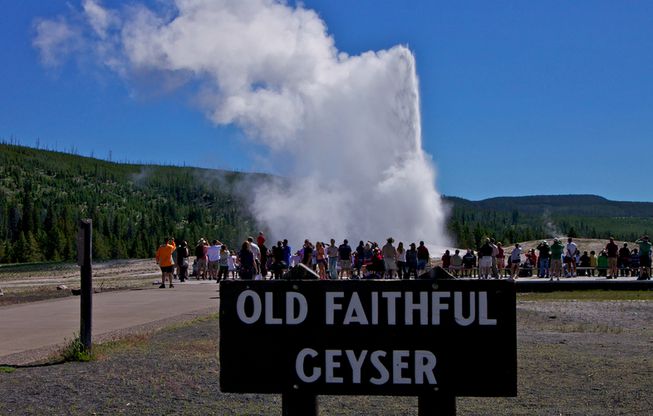 So why did a woman suffer burns at Yellowstone Park Tuesday morning? The woman illegally entered the Park and was taking pictures near a HOT thermal feature. As she backed up, she fell in. The report does not say which thermal feature gave her burns, but she had to be airlifted to the Eastern Idaho Regional Medical Center for aid.

After the woman got into hot water, she drove to the northern entrance of the Park where she was stopped by a Park Ranger. The preventable accident is now being investigated. Trespassing into the closed Park and onto a thermal feature will be two of the federal charges she will be burned with.

Despite signage, warnings, educational programs, and common sense, some people feel that they have the right to violate all the warnings. In many cases drugs or alcohol are involved. In other cases, folks are plain stupid.

Last January, 2 men were sentenced for trespassing onto the restricted Old Faithful geyser area. They were sentenced to 10 days in jail and banned from the Park for 5 years. A $540 fine and 5 years of probation was also levied on them.

Last September, another man fell into a thermal feature near Old Faithful while taking a late-night walk. We have all heard of accidents at the geothermal features of Yellowstone Park for decades. Some people have died or been severely scarred form the super-heated water.

We live in a society where 95% of the rules are written because of 5% of the people. You would think that at some point, people would have more common sense or simply abide by the rules that are in place for everyone’s safety. Oh well.

Now, do not touch that coiled, rattling snake, it may…

For more Montana Grant, find him staying out of hot water at www.montanagrantfishing.com.