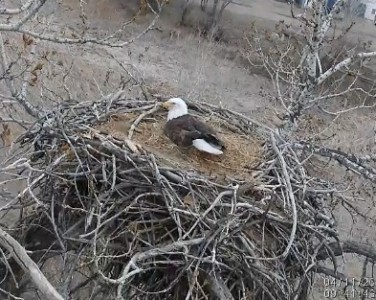 The eaglets were rescued on April 24 from a nest on state land just east of Interstate 90 in north Bozeman shortly after two adult bald eagles were found dead below the nest. A cause of death hasn’t been determined for the adult eagles, and they’ve been turned over to the U.S. Fish & Wildlife Service for further testing.

The Montana Raptor Conservation Center worked with a trained climber to retrieve the eaglets, which were then taken to the Center for food, fluids and evaluation. Both chicks were in good condition.

Adult bald eagles will usually adopt orphaned eaglets placed in an active nest with healthy habitat nearby. This presents the best chance at survival in the wild for orphaned eaglets, which cannot be raised in captivity and later released. FWP located a nest on private land south of Clarkston that met these criteria and worked with the landowner and Montana Rail Link to gain access to the nest.

The U.S. Fish & Wildlife Service is the lead agency investigating the death of the two adult eagles from Bozeman. But anyone with information on the case can provide tips anonymously by calling 1-800-TIP-MONT.