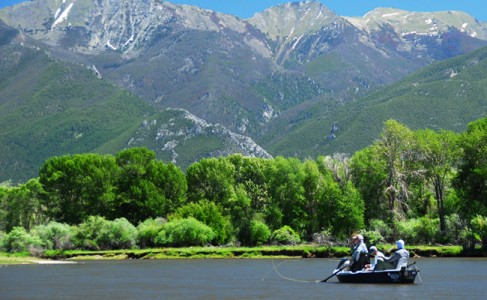 BOZEMAN, Mont., June 8, 2020 – The June 1 Water Supply Outlook Report, released by the Natural Resources Conservation Service (NRCS), highlights the weather patterns which occurred during the month of May, which ranged from cool and wet to anomalously warm and dry.

“River basins west of the Divide started May with cool and wet weather during the first three weeks, with snowmelt occurring at a gradual pace. During the same time, river basins east of the Divide didn’t receive the same wet weather pattern. Some basins in southwest Montana (Jefferson, Madison, and Gallatin) experienced well below average precipitation for the month of May.” According to Lucas Zukiewicz, NRCS water supply specialist for Montana. “Fortunately, temperatures hovered near seasonal normals and snowmelt was typical for this time of year during the first three weeks of May. However, the last week of the month and first week of June were game changers.”

“The weather we have experienced during the last two weeks may have redefined our late summer water resources in some river basins east of the Divide,” said Zukiewicz. During the last week of May, temperatures across the state gradually warmed to well above normal, reaching highs for daily average temperatures at mountain SNOTEL sites during the last weekend of the month. “The abundant sunshine and well above average temperatures paired with overnight temperatures above freezing at high elevations resulted in a significant amount of the remaining snow water in the snowpack being released into the river systems,” said Zukiewicz. Streamflows surged to the minor flood stage along some river systems in Montana; however, widespread flooding was not reported.

This year’s seasonal snowmelt runoff might yield the average, or above average, amount of overall water this year, but the timing of when it was delivered has been moved forward a few weeks east of the Divide. “It’s important to remember that this year snowpack in many of these basins east of the Divide peaked near to above normal, but the accelerated melt means it has moved through the systems ahead of schedule,” Zukiewicz said. Reservoir managers have been able to store much of this water, where storage is available, but on free-flowing river systems there could be implications later this summer.

“The main impact of this rapid melt in river basins east of the Divide is that what was a near or slightly below normal snowpack in some river basins east of the Divide on May 24 has been reduced to well below normal by June 8. This could lead to lower than normal flows in our rivers and streams later this summer when water demand is highest if summer precipitation fails to arrive,” said Zukiewicz. Summer streamflow forecasts for the June 1 through September 30 have decreased from May 1 and range from near to slightly below average in northern and central river basins, to well below average for the Jefferson River basin in southwest Montana.

While snowmelt has also been rapid in basins west of the Divide since late May, snowpack in the Kootenai, Flathead, and Lower Clark Fork River basins is above normal for this date. “These basins benefitted from cool weather during April and the first three weeks of May, which helped to prolong the seasonal snowpack. Additional May precipitation added water to the system,” Zukiewicz said. “Summer streamflows in this region are the highlight of the state, and summer volumes look to be near to above average for the June 1 through September 30 period.”

Monthly Water Supply Outlook Reports can be found at the website below after the fifth business day of the month: https://www.nrcs.usda.gov/wps/portal/nrcs/mt/snow/