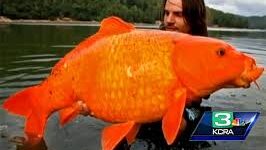 Montana Fish, Wildlife & Parks is proposing to use the chemical rotenone to remove invasive goldfish from an unnamed private pond on upper CK Creek, approximately 1 mile from Zortman. The public is invited to comment on this action.

Goldfish are considered an aquatic invasive species. They are a freshwater fish capable of surviving in Montana, and proper disposal of these fish is necessary to eliminate their spread.  This population threatens downstream populations of several native prairie fish species, along with other desired fish in the watershed.

“We attempted a non-chemical effort to remove the goldfish in 2016, when they were first confirmed, but it failed to remove all the fish,” said fisheries biologist Cody Nagel  “By removing all fish from this pond we will eliminate the risk of goldfish spreading to downstream locations, including Fort Peck Reservoir, where we definitely don’t want them.”

The chemical proposed for removal of fish uses rotenone as its active agent. Rotenone is a naturally occurring substance derived from the roots of tropical plants in the bean family. It has been used by native people for centuries to capture fish and has been used in fisheries management in North America since the 1930s.

Rotenone is applied to the water and enters the fish through the gills, where it affects a fish’s ability to breath. It is effective at very low concentrations because it is readily absorbed into the bloodstream through the thin cellular layer of the gills. Mammals, birds and other non-gill breathing organisms do not have this rapid absorption route into the bloodstream and are not affected by consuming treated water or dead fish at the concentrations used in fisheries management.

Goldfish are the only species of fish in the pond. This pond has historically been fishless, and there are no plans to stock fish after goldfish are removed due to the pond’s small size.

A draft environmental assessment is available for review and public comment. The EA can be viewed online at fwp.mt.gov/news/publicNotices/environmentalAssessments/speciesRemovalAndRelocation/pn_0084.html or a hard copy can be obtained by calling 406-265-6177. Comments can be submitted online, emailed to cnagel@mt.gov, or mailed to: MT FWP, Attn: Goldfish Pond Removal, 2165 Hwy 2 East, Havre, MT 59501