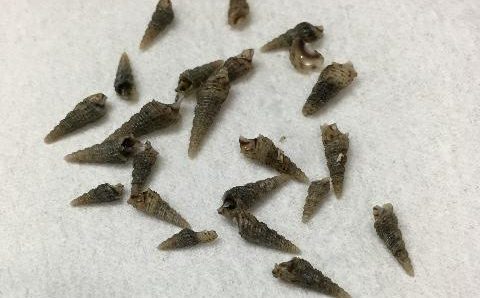 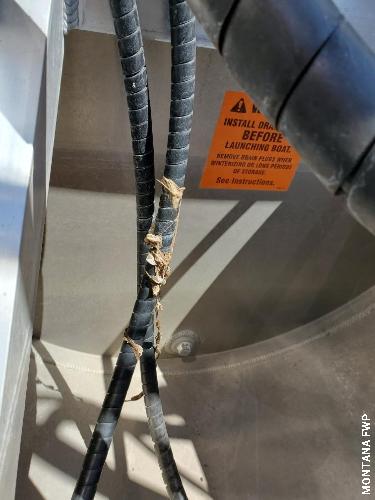 Montana watercraft inspection stations have intercepted 13 boats carrying invasive mollusks into the state this year. As of May 30, inspectors have caught 12 boats with invasive zebra or quagga mussels and one boat with red rim melania snails attached to watercraft.

The mussel-fouled boats typically come from mid-west states or Arizona after having spent several weeks or months in mussel-infested waters. All boat owners must have their watercraft inspected when entering Montana.

Last week, a pontoon boat that was purchased in Minnesota came through the Flowing Wells watercraft inspection station located east of Jordan. The new owner planned to launch from Rock Creek in Fort Peck Reservoir and knew that the boat needed to be inspected before launch. Flowing Wells inspectors removed invasive mussels on weeds that were wrapped around the fuel line going to the engines of the boat. No other mussels were found on the boat.

Invasive Red Rim Melania snails were found on a motorboat at the Anaconda station on May 11. The boat was traveling from Lake Havasu, AZ, to Washington state when the Anaconda inspectors found the snails under a live-well screen. Red Rim Melania snails are native to Africa and Asia and are thought to have been introduced to North America when someone dumped an aquarium tank into open water.

Montana inspection stations have checked nearly 16,000 boats this year, which is 6,700 more boats than this time last year. Inspection numbers for March through May are greater than the previous two years.