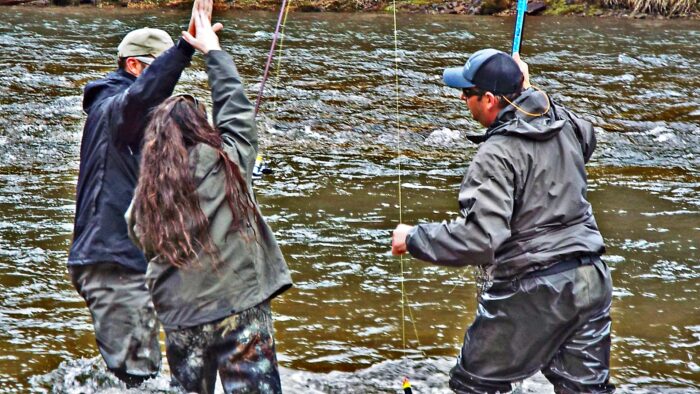 There are many awesome things about being a hunter, trapper and/or angler, but one thing I, personally, find exceptionally satisfying is seeing other people tag/trap/catch their animals and/or fish.  I mean, we are all in this to fill our own freezers/fur sheds, but how awesome is it to see somebody else tag something, especially if you’re a first-hand witness?  That is one of my favorite things in the world.  I don’t care if the person is 10 years-old or 80 years-old or anywhere in between.  I LOVE IT.  After recently posting photos of a few friends with their spring bears, it made me realize that I obviously have not been getting out as much as I should.  However, to see friends get what they’re after is so fulfilling.

I did not draw any tags that I put in for this year, but there are people I know that did–for example, a friend got a moose tag in the area she chose…she was one of three people drawn!  I am so excited for her, and I have that same excitement for her getting her moose that I would if I were the one who were drawn for that same tag (which I did put in for, too lol).

In short, as long as we all support each other as sportsmen (and sportswomen for those who prefer that term), whether you’re out hunting, trapping or fishing, and as long as we are ethical and help out where needed, success can be defined in other ways than filling our own tags/freezers.  I have been blessed to have the mentors I have had in my life, and I am so grateful for the time they took to “show me the ropes”.  Being able to pass what I know to somebody is an awesome feeling, too.

So, just be a part of another sportsman’s story, whether you’re high fiving them after you see a picture of what they got, helping them to pack out an animal or just out there in the field or on the water with them.  It is a great feeling all-around!