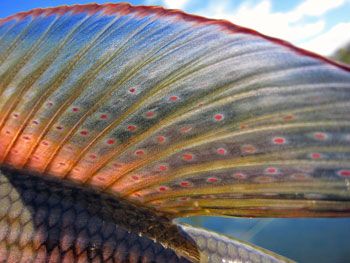 GRAYLING NOT PROTECTED!!!
By Montana Grant

The Artic Grayling is a freshwater fish that is related to trout. It was a resident of Montana until several other salmonid species were introduced.

The first Grayling that I ever caught was under the bridge of at Madison Junction in Yellowstone Park. The Gibbon River had grayling in abundance at that time. Hyalite Lake also has grayling in it up t 20 inches but must be released. I usually catch a half dozen or so a year, especially ice fishing. Twice I have caught the Grand Slam in the Madison River on the Lower Madison. A Rainbow, Brown, Brook, Whitefish, and Grayling in one day.

US Wildlife officials rejected any new protections for this rare, native species. This decision came after years of law suits and appeals to add protections to this rare fish. Government officials claim that “their conservation measures have improved the fish’s habitat and will lessen future temperature increases in the cold waters they reside in.”

The Big Hole River has been targeted for grayling conservation. Numbers have doubled to about 1,500 adult fish in the watershed. Other trout species compete with the habitat. Many lakes also are home to Grayling. Despite these efforts, Grayling occupy just a fraction of their historical habitat.

Efforts to protect the Grayling have been made since 1991. Officials stated in 1994 and 2010 that protections were needed. Other species have taken priority. Native Cutthroats seem to get more attention and funds. Grayling are not actually a trout species but are related to salmonids.

Hopefully, Graylings will get support before they become “Gonelings”.