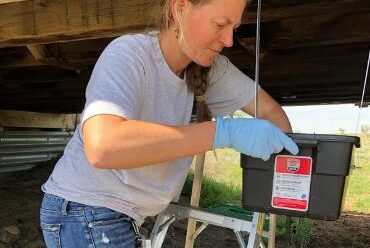 Bats play a very important role in our ecosystem, pollinating many important plants, devouring thousands of bugs including mosquitoes, and saving farmers in the U.S. $23 billion annually in crop damage and pesticide use. Unfortunately, bats face many threats including habitat loss, persecution from fear or misunderstanding, wind turbines in areas used by bats, and the latest threat to the scene – white-nose syndrome (WNS). WNS is caused by a fungus, Pseudogymnoascus destructans, which attaches to the skin of bats and interrupts winter hibernation. By waking too soon, they use up important energy reserves needed to get through the winter and eventually perish.

In Montana, FWP and partners concerned about conservation are doing their part to monitor the spread of WNS. FWP Region 7 Nongame Biologist Brandi Skone and Wildlife Intern Rhonda Wagoner have been visiting bat roost sites under bridges and elsewhere to collect guano samples and environmental swabs. Recently, biologists detected the fungus at three sites in far eastern Montana. Although the fungus is present, there is no evidence of the disease yet, and we are hopeful that Montana’s bats will not be affected to the extent that they have been on the East Coast, where millions of bats have been lost to the disease.