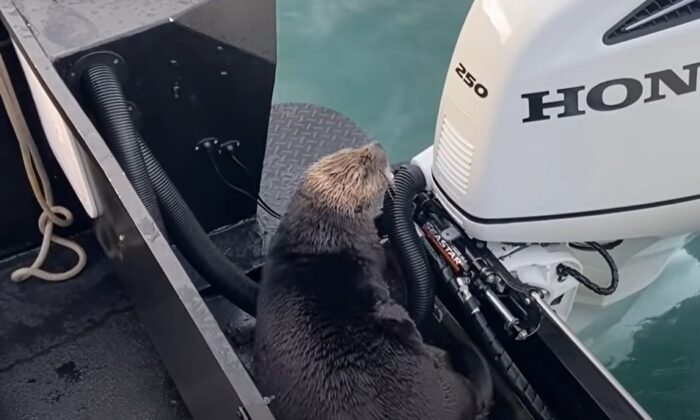 This is the dramatic moment a genius otter being chased by a killer whale hops onto a boat for safety with just seconds to spare. In the incredible footage, captured in Halibut Cove, Alaska, on Sunday July 26, the otter is first seen roughly 200yds away from John Dornellas’ boat, swimming frantically as the orca follows. As it reaches John’s boat the otter swims around the outside, looking for a safe haven to climb onto as the orca closes in. Eventually, the otter jumps up onto the transom of John’s vessel moments before the whale arrives at the surface just feet away. John, 37, revealed a game of cat-and-mouse followed, with the otter hopping back into the water in an attempt to get away, only for the orca to chase it back up again three or four times. His fellow captain, Chantrelle Major, also filmed the moment from her vessel nearby, with the orca then circling John’s boat in search of the otter. Eventually, once the orca had distanced itself from the boat, John, working with Coldwater Alaska, an exploration company providing boat trips in the area, headed for his next pickup in Halibut Cove Lagoon and when at a safe distance the otter plunged safely into the water. John later discovered the orca, ID number AT163, was the largest in its pod.