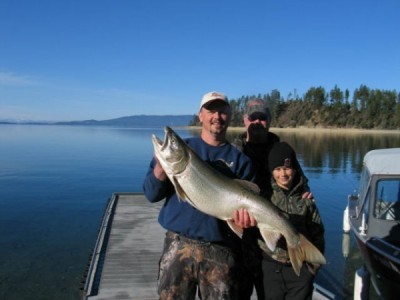 The second week of 2020 Fall Mack Days finished with a total of 1,619 lake trout entered over the weekend. Sponsored by the Confederated Salish and Kootenai Tribes the event is used as a management tool to reduce the numbers of non-native lake trout in Flathead Lake and increased the populations of bull trout and westslope cutthroat trout. UP to $200,000 in Cash and Prizes will be awarded at the conclusion of the event on November 15th.  Monday thru Thursday total is 1,205. Final total is at 5,477. Total for Friday was 526, Saturday was a little better with 591, and Sunday 496.

Flathead Lake is normally one of the most beautiful lakes in the country. But just like everywhere else that beauty did not show through the smoke filled air we have been experiencing the past week. Some days it was hard to see any distance at all on the water. The anglers say the fish even noticed and were not cooperating-they just weren’t hitting the lures.

The first day of the Bucket of Fish competition was on Friday smoke and all. Winning with the heaviest bucket of four lake trout was Rick Skates of Polson. His bucket weighed in at 18.35 pounds. Rick reported that he caught a nice bull trout-first one in fifteen years.  Second place bucket went to Terry Krogstad of Kalispell-17.8, Roger Schiff-Whitefish was 3rd-15.8, Brad Ivanoff-Arlee-10.6, and Jerry Luderman of Whitefish at 10.0. The next bucket day is Saturday October 10th.

The tagged lake trout ($10,000) Little Fin has not yet been reeled in. He could be anywhere in the lake. There are also 3-$5,000 and 5-$1,000 tagged lake trout lurking out in Flathead Lake-plus there are over 9,000 with values from $500-$100. A $200 tagged lake trout was caught by Clay Anderson of Kalispell. That lake trout was tagged 10/27/17 at Rocky Pt. on the south end of the lake and was caught by Clay at the Center Bar on the north end of the lake. Other $100 tagged fish were turned in by Jeffrey Freeman-Polson, Brad Ivanoff-Arlee, Richard Kreis and Laurie Kreis-Huson, Jack Kirkland of Missoula, and Julie Perkins of Kalispell. Who will be the first to catch a $1,000+lake trout in 2020 Fall Mack Days?

Richard Kreis added to the competition for Smallest Lake Trout with a 144mm 5 ¾” entry. Catching a small lake trout creates excitement just as catching a large lake trout does even though it is not as much work. Sometimes you don’t even know they are on the lure or fly until you reel in your line.

Lady angler Julie Perkins of Kalispell has 130 to lead the ladies, 2nd Laurie Kreis of Huson with 71, 3rd Kim McMillie of Polson with 36, 4th Valerie Seman of Missoula with 27, 5th Lorina Freeman of Polson with 26.

Jeff Devlin of Polson is 1st in the 13-17 with 9, Makenna Garrett of Missoula has 8, and Wyatt Thompson of Bigfork is 3rd with 2.

Tripp Bick of Arlee leads the 12 & Under with 10, Gage Spring of Alberton has 4 for 2nd, and Kaden Blowers of Missoula is 3rd with 1.

Five weekend drawings of $100 are drawn on Sunday by a computer random generator program after the last lake trout entry is in with staff as witness. The first week was delayed because of computer issues. Those results were: Bob Turner, Ken Varga of Kalispell, Mike Benson, Scott Bombard, and Robert Hopp of Florence. 2nd week winners: Gina Schiff of Whitefish, Mike Benson, Bob Christensen of Missoula, John Gauci, and Terry Krogstad.

For more information go to www.mackdays.com or telephone 406-270-3386. Come out and join in. All it takes is one ticket in the lottery drawing to win a cash prize or maybe it might just be a winning tagged fish.