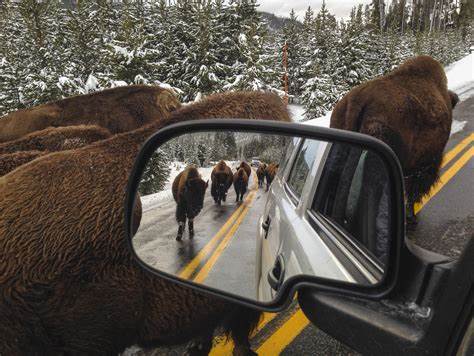 Two more morons have been arrested for harassing Bison in Yellowstone Park! The two young men from Utah and Arizona decided to chase Bison herds on their motorcycles. They rode across sensitive areas and into herds of buffalo. Their ride touched, teased, frightened, and intentionally disturbed Bison. Both appeared in Federal Court in Yellowstone.

The harassment occurred near Fountain Flats Drive. They made a video of their foolishness and posted it on Facebook. The video shows their antics and the herd chasing them.  Other spectators could be heard telling them to “get out of the field.’ 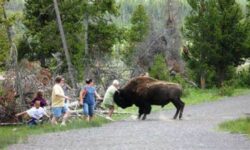 This Summer has witnessed a Biker woman having her pants ripped off by a bison, a goring of a 72-year-old woman in June, and several other dumb encounters. Visitors have also ventured out onto the protected hot springs, Old Faithful Geyser, and other sensitive geothermal features.

Signage, education, and staff all remind visitors to follow the rules. Apparently, some idiots feel a need to break them. Fines, service work, and banning them from the park are routine punishments. In some cases, the Bison, bears, or critters win and a trip to the hospital is required.

We are Buffaloed at how stupid some people can be!

For more Montana Grant, find him Buffaloed at www.montanagrantfishing.com.