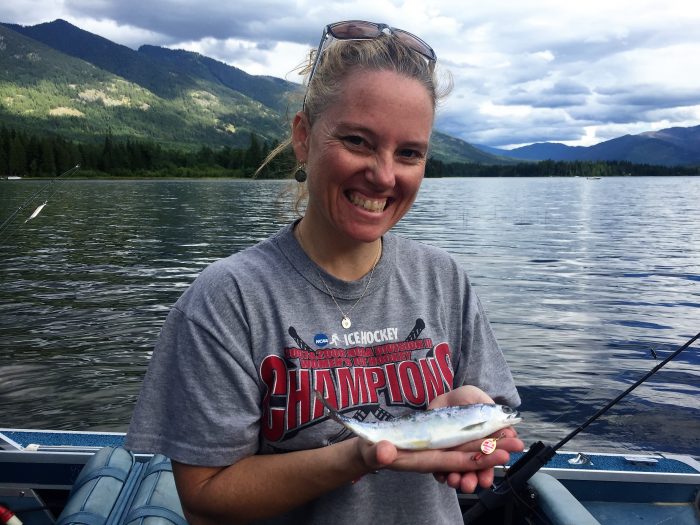 Canyon Ferry:  Walleye fishing has slowed down with a few anglers having success while trolling bottom bouncers or using jigs near Hole-In-The-Wall, Confederate and from Hellgate to Avalanche in 20 to 40 feet of water.  Shore anglers are catching some walleye at Confederate in the mornings and rainbows in the evenings. North of the Silos shore anglers are catching yellow perch on worms.  Troy Humphrey, FWP, Helena

Hauser:  A few rainbows were caught over the weekend. Most are being picked up around York Bridge, White Sandy and Black Sandy while out trolling cowbells with wedding rings 10-20 feet down in the water column. Shore anglers are also picking up a few rainbows around Black Sandy and the Causeway Bridge as well with plain crawlers and marshmallows. Very few walleye and perch were seen over the weekend and a lot of folks were just out boating and having a good time.   Chris Hurley, FWP, Helena

Holter: Rainbows action was pretty good over the weekend. Most fish were picked up while out trolling cowbells tipped with crawlers in the canyon from the Oxbow Bend to the Sleeping Giant. Rainbow anglers are also picking up some nice fish from shore at the Departure Point and the Gates of the Mountains with crawlers and power bait. Perch action is still pretty good. The best bite has been between Split Rock and the Power Lines. Pitching jigs around weed beds in 10-12 feet of water is working well. Small green, orange or black jigs tipped with crawlers are popular choices. Walleye fishing was slow over the weekend with a lot of folks just out recreating.  Chris Hurley, FWP, Helena

Helena Valley Regulating Reservoir:  The snagging season for Kokanee Salmon opens on September 1st and will run through October 31st.  Limits are 35 salmon daily with 70 in possession. Anglers are still picking up quite a few fish and the action should continue to get better throughout the month. Snagging near the Pump House and the Outlet has been pretty productive and popular and snagging near the Inlet has been producing the best numbers of salmon lately.   Chris Hurley, FWP, Helena