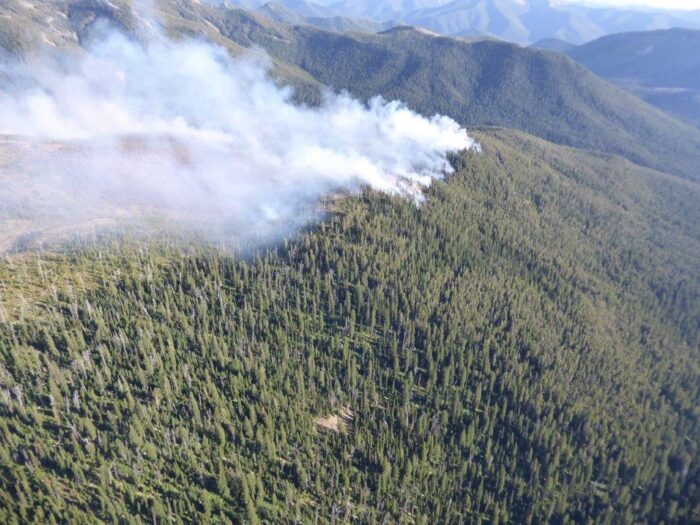 The Drumming Fire has continued to actively burn, fueled by the return to warm temperatures and increased winds; a small spot fire (just over 1 acre) was detected east of the fire at the Continental Divide.The fire was last mapped at 435 acres as of 0930 MDT on September 3rd. Smoke is expected to remain visible from communities along the Rocky Mountain front. For more information regarding wildfire smoke and Covid-19, please see the articles section. A smoke monitor has been placed at the Heart Butte High School to gauge fire impacts on the surrounding communities.

The Drumming Fire was detected by a Forest Health flight during the afternoon of August 26th; the fire was originally reported as two separate starts, the Drumming Fire and Drumming 2. The fires joined together during the afternoon of the 26th, growing from 3-5 acres to 30 acres. The fire is burning within a 30-year-old burn on a southwest facing ridge, 4 miles east of the Continental Divide. It is actively burning in the heavy dead and down (1,000-hour fuels) and its growth is pushed by southwest winds. There is potential for the fire to burn east-northeast into the Beaver Lake area and onto the eastern side of the divide in the Elbow Creek drainage. The 2015 Family Peak burn and 2017 Crucifixion burn provide significant barriers to this spread toward the east, see the Fire History Map in the maps section for a visual representation.

A third start in the area was detected on August 28th, the Lodgepole Creek Fire. The management plan for Lodgepole Creek will remain the same as that for the Drumming Fire, all updates on this page will apply to both fires unless explicitly stated otherwise.

Initial attack measures were deemed inadvisable based on the current values at risk, the Drumming and Lodgepole Creek Fires are not being staffed at this time. Spotted Bear Ranger District will continue to manage the fire in the coming weeks; Flathead (SBRD) and Helena-Lewis and Clark (RMRD) have sent individuals to post closure signs and make visitor contacts near affected trails on both forests. Firefighters from the Rocky Mountain Ranger District will be initiating point protection plans at Badger Cabin if necessary.

Please see the official trail closure orders and maps for specific information on the CDT reroute and other impacted trails.