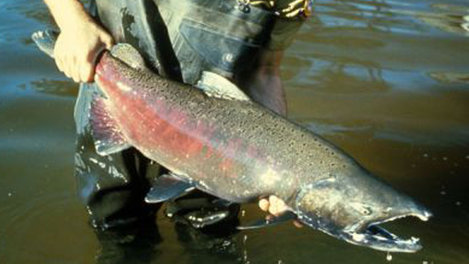 It appears that the fall egg collection from spawning chinook salmon is complete on Fort Peck Reservoir. It was a success according to the number of eggs collected. Here is a recap from FWP
Fisheries Friday, Oct. 23, 2020.

Fort Peck fisheries and hatchery staff completed Chinook salmon collection and egg-taking efforts this week.
The drop in temperatures last week led to a slight bump in salmon numbers that pushed them into shallow areas and into spawning mode. Thanks to some very large females and a 1:1 male to female ratio (sometimes we capture more males than females), a total of 425,589 eggs were collected this fall. A total of 431,280 eggs were collected in 2019.
Compared to previous years, adult salmon collected in 2020 were rather large. Average weight of females captured this fall was 18.9 pounds compared to 14.5 pounds in 2019. The largest female captured weighed 28 pounds and we had one big male that weighed 27 pounds.
Although some smaller salmon were present, it appeared to be comprised largely of 4-year old fish which would explain the increase in weights. Three-year old salmon comprised 97% of the females captured in 2019. Otoliths were collected from fish used in the spawning process and will be aged this winter to determine age composition.
It should also be noted there was a high abundance of young-of-year cisco and older, larger adult cisco captured during standardized sampling surveys in September. This abundance of forage likely led to favorable growth rates and egg production for females.
Thanks for being interested in salmon!
-Heath
For those interested, we crunched some numbers to compare females and their egg production.
For the most part, there is a pattern where bigger fish = bigger eggs. Hopefully, this equates to better eye-up/hatching success.
• We spawned 97 females which averaged 4,388 eggs/female.
• The number of eggs-per-ounce was 87.52. This is compared to last year’s number, which was 111 eggs per ounce(in other words, bigger eggs this year)
• Out of those 97 females, we took a total of 305.68 lbs of eggs, which averages out to 3.15 lbs of eggs/female!

Thanks for following our salmon spawn updates. We will give more information later on hatching/eye-up success, and of course stocking numbers in the spring!