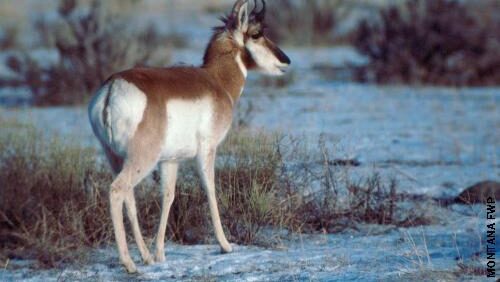 With the antelope rifle season a couple weeks away, many folks are gearing up to go afield. There is a new harvest opportunity starting this year: hunters who drew the Region 7 either-sex (007-20) or doe/fawn (007-30) license are eligible to purchase the new 799-30 second doe/fawn license. Unlike the region-wide licenses, however, the 799-30 license is ONLY valid in hunting districts 704 and 705.

Antelope numbers are currently robust in the southern portions of hunting districts 704 and 705. Some of the better numbers are located from Powderville and Volborg south to the Wyoming line, including areas around Alzada, Biddle, Broadus, Quietus, and in suitable habitat south of Ashland.

Why the additional doe/fawn license?

For the past few years, there has been a strong disparity in antelope densities between the southern and northern portions of Region 7. A series of harsh winters, drought, and hemorrhagic disease outbreaks resulted in antelope populations across the region hitting a low point in 2012. Since then population recovery has been variable. Populations have been generally slow to recover in hunting districts 700 and 701, where numbers remain below long-term average. Conversely, antelope populations in portions of hunting districts 704 and 705 are well above the long-term average.

Landowner comments about overabundant antelope have been increasing in the southern portions of hunting districts 704 and 705. The additional doe/fawn license in hunting districts 704 and 705 will increase harvest where antelope numbers and hunting opportunity are high, provide additional opportunity for sportsmen, and allow landowners with overabundant antelope to manage antelope numbers through hunter harvest.

The prerequisite of possessing a 007-20 and/or 007-30 antelope license prior to obtaining this new doe/fawn license is intended to allow increased harvest opportunity where antelope numbers are stronger (i.e., southern portions of hunting districts 704 and 705) without exacerbating hunter crowding. In essence, it’s putting more licenses in the pockets of hunters rather than adding more hunters to this particular area.

FWP reminds hunters that, unlike the region-wide licenses, this 799-30 license is ONLY valid in hunting districts 704 and 705. As of September 28, there were 469 of the 799-30 doe/fawn licenses available. They can be purchased online (be sure to allocate plenty of time ahead of your trip for your license to be processed and mailed) or over the counter on a first-come, first-served basis (one per hunter). Hunters may hold up to a total of three antelope licenses in a given year, of which only one may be valid for either sex.

Remember that many private lands offer antelope hunting. Do some homework and ask early. Not only may you find a fantastic hunting opportunity, but you also could be helping a landowner who has an overabundance of antelope.