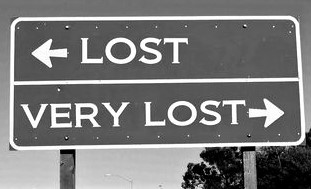 When we venture afield to hunt, fish, or enjoy the outdoors, we are at risk. Things can change in a moment.

LOST is a word seldom spoken. We hate to even consider that we may not know where we are. Getting LOST is for rookies, newbies, and inexperienced city folks. Men cannot admit they are ever LOST! We never even ask directions.

Even with todays modern technology, we can end up LOST. If the satellites do not align, you are in a dead zone, the batteries fail, or you simply lose the GPS handheld unit.

Weather is always a factor. Rain, wind, snow, or a combination can quickly disorient and confuse even the most experienced outdoorsmen.

During an early season elk hunt, I was chasing a Bull in the Dark Hollow from Hell. Every time I thought I had him, he was behind a tree, or a cow was in the way or… Then a Blizzard hit! I have hunted in the snow many times, but this wet snow stuck to everything. It was a complete whiteout.

The first thing that I dad was to remain calm. I knew the creek ran north/south. Topography would offer direction. There was road up 2 hills and a mile or so away. I got out my compass!

A Compass is old school, but it does need batteries and always works. Using the compass, I found the game trail that I walked in on. There was no way to see more than a few yards. Cell phone and satellite service was out. There on the tree was my Brite Eye reflector. I knew exactly where I was. I followed the game trail from reflector to reflector and locate the road.

At this point, the blizzard had worsened. I started considering shelter when I saw a truck coming up the road. It was friend Gary with his 4WD Monster Rig, that I will never make fun of again. He figured out what I would do and came to the rescue.

I was prepared to spend the night but who wants to do that? There was an area I remembered had several pies that had blown over. A makeshift primitive shelter would have been quick. My space blanket would be draped and secured. A quick fire was easy thanks to immediate dead wood and branches. I would have climbed and use my pruners to clear the underneath branches. Other green branches would make a bed. A pit at the opening had a tree well that would have served as my fireplace. My Lip Balm was my fire starter.  A metal cup contained my flashlight, dry matches, some bouillon cubes, and chocolates. Some aspirin, band aids, ibuprofen, and Propel drink powder was also on board. It would have been cold, but I would survive. Never go into the mountains without preparing for an emergency.

As a kid, my Dad, and Boy Scouting, taught me how to survive. The life lessons that I learned were priceless. We spent the night in the woods alone, with only our skills and the clothes we wore. That discomfort motivates me to never have to do it again, but I can if needed. You may have to deal with a friend or yourself due to an injury. If you plan and prepare for the worst, it rarely happens. Its when you have not prepared that something bad may happen.

For more Montana Grant, find him surviving at www.montanagrantfishing.com.