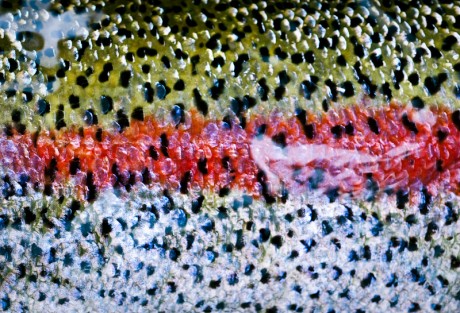 Rainbow Trout are perhaps the most familiar trout. Bows are related to Steelhead Trout. Original Rainbow populations come from the Pacific Ocean and are common in the western US and eastern Siberia watersheds. 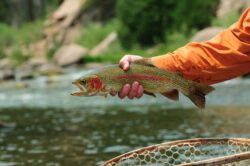 Montana has no true native Rainbow Trout populations. Almost all of Montana’s Bows are a result of stocking. Their genetics can be traced to western states from California to Washington, and Canada. There are literally hundreds of different genetic strains of Rainbow Trout found in Montana’s watersheds and lakes. The Madison River alone has 17 rainbow variations that could potentially spawn year-round. All are a result of stocking.

There are two possibilities for Rainbow Natives in Montana. The Redband rainbow trout are related to the Columbia River Steelheads. They had found a way into the Kootenai River system and apparently stayed as residents. The only other possibility is the small tributary in Yellowstone Park known as the Pacific Creek. These are the only 2 known routes that may have flowed over the Rocky Mountain Range, and into Montana.

The first Rainbow Trout Hatchery started in 1870. A small tributary to the San Francisco Bay called San Leandro Creek was the site of this hatchery. In 1875, Rainbow Trout eggs from this hatchery were shipped to Caledonia, New York. In 1876, a small hatchery in Northville, Michigan began raising Rainbows. Later, our Federal Hatcheries, such as the one in Ennis, MT, also raised and stocked Rainbows.

The first recorded Rainbow Trout stockings in Montana occurred in 1889. Since then, hundreds of millions of Rainbow trout have been stocked throughout Montana. Many subspecies have also been raised and released. Kamloops from British Columbia, Eagle Lake, Kern’s River, Goldens from California, and Beardslee Rainbows from a lake in Washington are just a few.

Yellowstone Park began stocking Rainbows in many of the fishless waters in the Park. Less than 40% of Yellowstone’s waters had any fish at all. Eggs were hatched out and released into ponds such as Trout Lake, Grebe Lake, and other areas to grow on their own. After a year or so, live fish were netted from these ponds and transported to the local watersheds. The Gibbon River was the first to receive Rainbows in 1880. That is 4 years after Custer’s Last Stand!

Rainbows can hybridize with other native trout such as Cutthroats. Because of this, the “Native” genetics have become compromised. Only a few areas still have Native Cutthroat populations with original genetics. McBride’s Lake near Slough Creek is one of these areas. Current fishery experts are trying to restore these native watersheds with Native Cutthroats.

Most Crossbred Rainbow variants can not reproduce. Palomino or Golden Trout are the albino mutant version. They add color and diversity to fish populations. These Hybrids are strong fighters and can grow exceedingly large. West Virginia was the first state hatchery to produce stockable numbers. Today, many states produce and stock these hybrids. 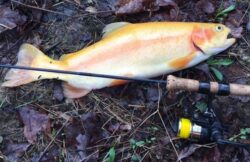 In recent years, several diseases such as Whirling Disease has impacted wild Rainbow populations. Much research has been done and changes to river flows and genetics have been completed. Other invasive snails, algae, and diseases are also a concern.

Rainbow Trout are a beautiful, strong, and tasty fish. They are wonderful sport to catch and symbols of clean, cool, and healthy waters. Whether you fish for local wild populations or the native Steelhead populations of the Northwest and Canada, Rainbows rarely disappoint.

Catch a Biggun at the end of the Rainbow!