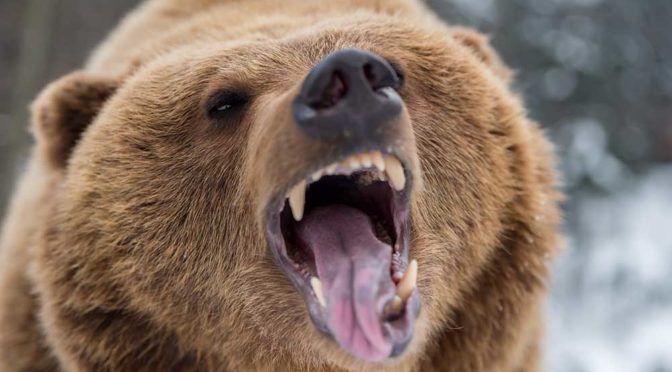 Kalispell — On the morning of Oct. 31, the Montana Fish, Wildlife & Parks Region 1 Wildlife
Human Attack Response Team responded to a bear attack on timberland near Smith Lake north
of Whitefish Lake.
FWP received a report of a father and son from the Flathead Valley hunting along a gated road
when a grizzly bear charged out of a thick, wooded area along the road at very close range. The
two individuals sustained significant injuries before they were able to shoot and kill the bear.
The ALERT Air Ambulance transported the individuals to Kalispell Regional Medical Center for
treatment.
The area where the incident occurred is in the King Creek drainage along Montana Department
of Natural Resources and Conservation land and private timberland.
The Wildlife Human Attack Response Team conducted the investigation. A deer carcass was
cached in the thick timber along the edge of the road adjacent to where the attack occurred.
FWP inspected the dead bear and identified it as an adult female estimated to be nearly 20 years
old. It did not have any history of conflict or other management actions. It is believed to have at
least one offspring at the time of the incident. FWP set up cameras in the area to help identify
the potential offspring. No management action is planned at this time.
There are no formal closures in the area.
“Based on the evidence gathered at the scene and interviews with the victims, we believe this
was a surprise encounter involving an adult female grizzly bear defending a food source and her
offspring,” FWP Regional Game Warden Captain Lee Anderson said.
Bear attacks on humans are rare, but Montana is bear country with populations of grizzly and
black bears that frequent higher and lower elevations. Bear are increasingly active and seeking
food in the fall months before denning season. Bears typically enter their dens for the winter
beginning in late November.
Residents are encouraged to report bear activity as soon as possible. In northwest Montana, to
report grizzly bear activity in the greater Flathead Valley, call FWP bear management specialists
at (406) 250-1265. To report black bear and mountain lion activity in the greater Flathead Valley,
call (406) 250-0062). To report bear activity in the Cabinet-Yaak area, call (406) 291-1320.
General tips to stay safe in bear country:
• Carry and know how to use bear spray.
• Stay alert and look for bear activity, especially where visibility and hearing are limited.
• Hiking in a group will decrease the chances of surprising a bear. A group of people is more
likely to deter an encounter, and bears will be able to see, hear, and smell the people
more easily.
• Make your presence known by making noise, especially when near streams or in thick
forest where visibility is low. This can be the key to avoiding encounters. Most bears will
avoid humans when they know humans are present.
• Use caution in areas like berry patches where bears occur.
• Avoid carcass sites and scavenger concentrations
• Hunters should be prepared to cut up the carcass of a harvested animal in the dark by
carrying strong headlamps. Be extra vigilant and watch for bears