BROOKIES!!! “If they are seen, the waters pristine!!!” Brook trout are a wonderful trout. In truth they are a Char, left over from the Ice Age. This Eastern and Canadian fish is hearty, beautiful, and tasty. They are native to clear, clean, and cold waters “of the springs”. 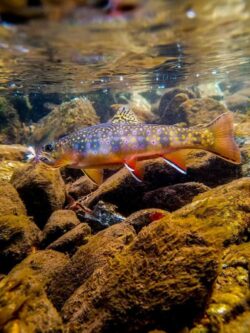 Brook trout are not native fish to Montana. Their presence is the result of stocking. Milk buckets full of small fry were carried by mules throughout the state. In places like Yellowstone Park, most of the waters were void of fish. The Brook trout made these waters their home.

Brook trout were first introduced to Montana in 1889. Today they are found throughout western and central Montana. A few other eastern Montana spots also hold these prolific trout.

Back East, Daniel Webster often wrote about catching Brookies with a Brace of wet flies. His largest of 14.5 lbs., in 1883, was illustrated in a classic Currier and Ives picture. He netted this HUGE brookie in Long Island, New York. His rod was made of Bamboo, the line of waxed horsehair, and the leader of sinew did the trick.

The Brook trout is perhaps the most beautiful of all trout. Along its back are worm shaped markings. Black marks on the dorsal fins are complimented with red lateral spots, circled in blue. The lower fins have white and black highlights. The tail is square. In the Fall, during the spawn, no trout is more beautiful.

The tail shape has also helped give Brookies the name, Squaretails. They are also known as Mud Trout, Speckled Trout, or just Specks. Indiscriminate, and over stocking, has created some waters that are stunted due to overpopulation.

Since Browns and Brook trout spawn at the same time each Fall, they can produce hybrids called Tiger Trout. Other hybrids have been created when blending Brooks and Lake trout to create a Splake. Hybrids are often sterile.

Today, Brook trout are being eradicated because they are not “Native Montanans!” Brook trout are voracious predators and will eat just about anything. They easily eat other smaller trout fry. Native Cutthroat populations struggle, when in competition with Brook trout. As a result, many Montana waters have huge limits for Brookies. In Yellowstone Park, several watersheds have been poisoned to remove Brook trout. The Lamar River watershed has mandatory kill, and no limit policy to remove them.

Brookies are often the first trout ever caught by many fishermen. These aggressive and beautiful trout are fun to catch and symbolize our clean watersheds.

For more Montana Grant, find him catching Brookies at www.montanagrantfishing.com.