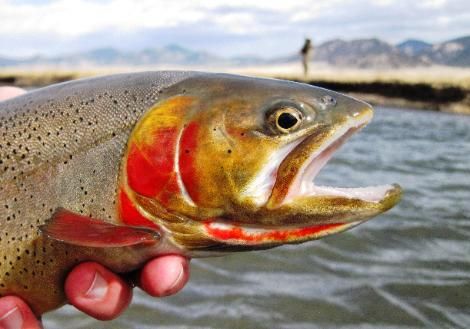 The Yellowstone Cutthroat is an amazing trout. This native trout may have come from ancient salmon runs that were blocked off by the rising Rocky Mountains. The Salmo Clarkii is a true Montana Native. 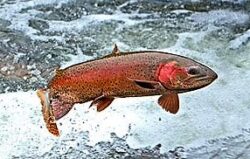 Ironically, taxonomists named this trout Salmo Bouvierii after an Army Captain, that originally patrolled Yellowstone Park, in 1883. When the Park first opened, there were no Park Rangers. Army troops were stationed to manage and protect the new park.

Today this old trout is named Oncorhynchus Clarkii. In 1989 they were moved out of the Salmo genus and into their own grouping. This reflects a closer relationship to Pacific salmon. The change was made due to improved genetic research.

West slope and Yellowstone Cutthroats are now two distinct subspecies.  The distinct red or pink slash under their throat identifies their unique species.

Cuts and Rainbows readily hybridize. Both are spring to early summer spawners and can inbreed. Cuts take 3 or more years to mature. A 30 incher is HUGE! Normally a 20-inch trout is more common. Cuts live up to 11 years in the wild.

Eagles, Ospreys, Lake trout, and Bears are the primary species that affect Cutthroat populations. In one of the last best places to find cutthroats, challenges have arisen. Yellowstone Lake became infested with Lake Trout, a major predator. An adult Laker eats 42 cuts a year. Monster lakers over 30 pounds were examined and had several cuts in the stomach at one time. The Cutthroat population went down the tubes. Thanks to decades of gill netting, mandatory kill/no limits on lakers, and using Judas Tagged Lakers to find spawning beds, the population is dropping fast. Now a special kibble, produced by the Bozeman Tech Center, destroys future lake trout eggs. The Cutties are finally making a comeback after 1.5 million dollars a year of work.

No trout takes a dry fly sexier than a Cutthroat. Their slow rise takes forever. Many anglers set the hook too fast. They fight strong and heavy. You may not get the best jumps and runs but you can’t beat their beautiful and unique colors.

For more Montana Grant, find him catching Cuts at www.montanagrantfishing.com.