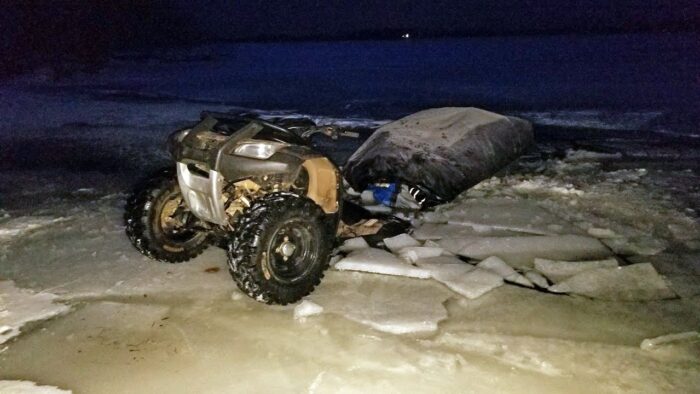 Ice can be dangerous. Many fishermen avoid all ice because of a close call or bad experience.

My friend Keith loves to fish but is terrified of ice. As a young hunter, he dropped a goose onto an icy bay. When he went onto the ice to retrieve his bird, the ice gave way. It turned out that the water was tidal and was at low tide. A space of a foot or so was under the ice. Then the water was several feet deep! Imagine having to swim under a void with an ice roof! Somehow, he used his shotgun to break enough ice to get into shallower water, where he could stand up. Hypothermic and scared, Keith finally made it to the shore. He also had his goose. 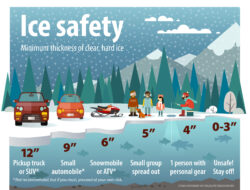 Last week some Lake Peck fishermen were on their way back to shore after checking their set ups. 4 guys were doubled up on two wheelers. One team drove onto thin ice and went through. The wheeler sank along with one of the fishermen. The second guy was able to hang on until his friends pulled him out.

Ice accidents can happen anywhere. I once found an iceman with a broken leg. He had stepped in an old ice hole and snapped his femur. I was able to painfully pull him out and lay him onto my sled. The access was a mile away. I covered him with my coat and started dragging him. This was before cell phones, so no help was coming soon. Once we beached, I built a fire and went for help.

Cold water quickly sucks the life out of the strongest and healthiest victims. If you do not believe me, join a Polar Bear club, and jump in. Your first 30 seconds are instantly gone. You can do nothing. Once you begin to think, crawl, and lay atop the ice and kick your feet/legs to help you flop onto the ice. Stay on your belly and crawl to safety.

If you flow under the ice due to a current or momentum, good luck. This may be what happened to the drowned Iceman last week. Even if you get to the surface, it is now blocked by a roof of ice.

Ice is dangerous. Always respect the risk and be prepared for any rescue. Carrying a throw rope, ice sled, ice picks. Extension poles or shovels are all good ideas. Wearing flotation clothing is smart. The insulation in the bibs and coats also floats. Also have stuff to warm up if you get wet. Matches, cell phones, extra gloves, and emergency blankets and garments are all things to have in your truck or camp.

No fish is worth dying for!

For more Montana Grant, find him on safe ice at www.montanagrantfishing.com.