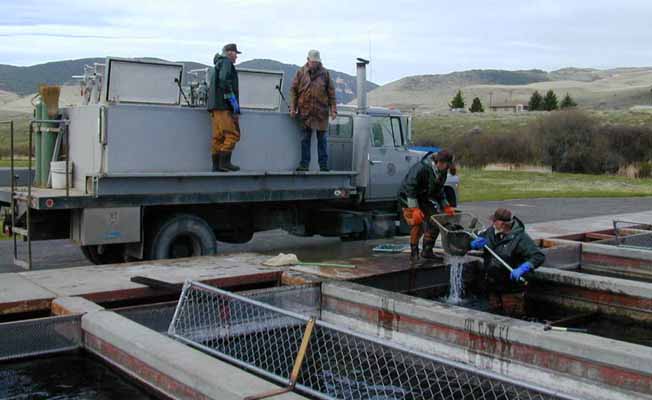 IS IT TIME TO STOCK TROUT AGAIN?
By Montana Grant

Amongst the ranks of fly fishermen and trout purists, “stocking” is a Fighting Word! Montana no longer stocks most of its premier Blue Ribbon Trout waters. All non-native “Wild Trout” are the result of stocking. The state’s main trout goal is to protect and preserve “Native Trout” populations. Most trout that come from hatcheries are released into lakes and areas where they are isolated. Kid ponds are a common destination for stocked trout.

Stocked trout can include Browns, Rainbows, Cutthroats, Brooks, Lakers, Goldens, and other variations of salmonoids. Mostly rainbows, Cutties, and Browns are in Montana’s stocking trucks.   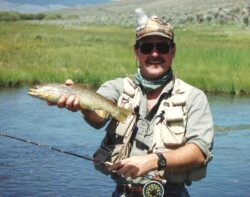 Most Trout Purists want to fish for “Native” fish in an uncrowded, pristine watersheds. Fly Fishing with barbless hooks and no kill rules are their preference. Montana’s Native trout are Cutthroats. Grayling and Whitefish. Entire, healthy watersheds of “Wild Trout” are being Rotenoned, poisoned, to restore “Native Trout” species due to pressure from Trout Unlimited and fly fishing groups.

Wild Trout are self-reproducing survivors from stocked fish. These include Browns, which are from Europe, Rainbows, which are from the Pacific Northwest, Brooks, that are from the east. All of these “Wild “trout are the result of generous stocking. Trout that were from great genetics adapted, adjusted, and survived to create “Wild Trout” populations. In some cases, Native Trout were displaced. Their weaker Genetics made them vulnerable to competition from stronger stocks of nonnative trout.

Original waters, where stocked fish have caught on, have a narrow Genetic footprint. In a hatchery, thousands of fish can come from identical Genetics. One female, spawned by one male can produce well over 1,000 fingerlings, that ended up stocked in one fishery. Genetic Diversity with these stocked fish is already too small.   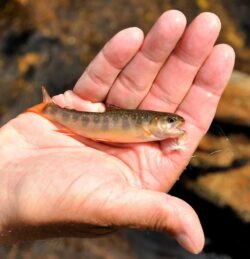 Currently, Montana Brown trout are in trouble. Rainbows have become impacted by Whirling’s disease and gill lice diseases. Brown Trout are also not reproducing as they once were. Historically healthy watersheds are losing trout populations. Several fish kills have surfaced in the past decade. Montana continues to NOT STOCK these areas. Wild Fish, from small Gene pools, have poor health and are in trouble. No new Genetics has been introduced in decades.

The problem is that these watersheds are changing. Waters are becoming warmer, lower, and overfished. There has also been no new stocked Genetics introduced into these watersheds. Fishing has changed dramatically from a few decades ago. Some of our cold-water release Dam fisheries are extremely challenged due to lack of water and cold water, all while being overly pounded by fishermen.

Genetic Erosion could be one overlooked problem. We can’t just sit back, and hope things will get better. Genetic Diversity may be needed.

Today’s Fishery Biology can identify, select, examine, and produce quality fish Genetics for specific waters. Bad genes can be removed, and good genetics implanted. These disease resistant, adaptable, healthy species could become the next generation of Wild Fish. The Science is there to support this opportunity.

Recently, the Madison River lost most of the next generation of Brown trout eggs, due to a Dam problem, that left most Spawning Redds high, and dry. The area between Quake Lake and Hegben Dam were most damaged. It will take several years for the fishery to restore itself if it can.

What if we encouraged the State to stock a Brown trout species that has fresh, healthy, disease resistant genetics to meet the watersheds limitations, diseases, and needs? Fertilized eggs could be the ideal way to begin. Now that the water levels have been restored, place the new genetics in artificial redds and see what happens. Trout born in these redds would be first generation Wild Fish. The results of this experiment could benefit the Bighole, Madison, Yellowstone, and other challenged fisheries where Wild brown trout are dying off in record numbers.

The stocking history of the Madison River is broad. Over 17 species of Rainbow trout have been stocked into this watershed. Some rainbows can reproduce almost any month of the year. Several species of Browns have also been stocked. Golden trout, grayling, cutties, and Brook trout have all been stocked in these waters. Their offspring are the Wild Trout of today. Other less strong stocked species died off and are out of the ecosystem. Native fish populations are minimal.

If we want to maintain and protect our “Wild Trout” populations, we need to consider adding newer and better genetics to their stock. Trout fishermen can argue and fight about stocking but…

Genetic health of fish is based upon Genetic Diversity.