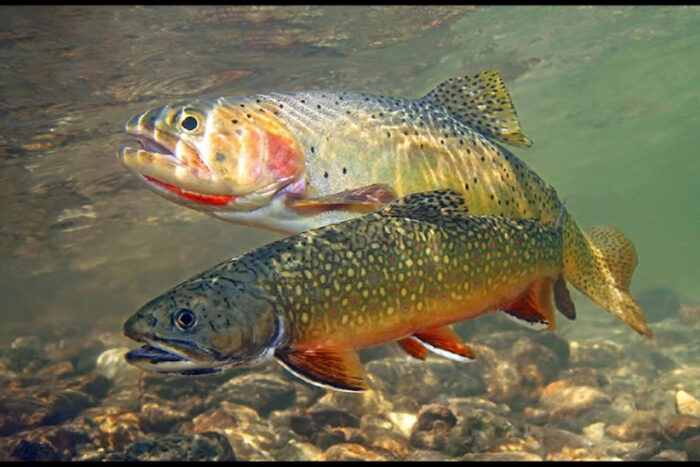 Montana has an abundance of great places to fish. The Yellowstone River is the largest, non-dammed river in the US. The Missouri River travels the entire state of Montana and is born from Yellowstone Park waters.

There are 31 Game Fish and 59 non-game fish, living in these waters. Only 13 of these Game Fish are Native to Montana. The rest have been introduced into the state.

Westslope Cutthroat and Yellowstone Cutthroat trout are the only Native trout. All the other trout and salmon have been introduced. Bull Trout can be found in north western Montana, but are a Char.

The Columbia River Red band Trout can be found in the very North West corner of our state. They have also been stocked in a few rivers. These Rainbow trout relatives may be the only Pacific strain of steelhead that made the migration up the Columbia River and over the Rockies. 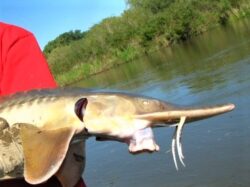 Warm water fish such as Lake Whitefish, Walleye, Yellow Perch, Large and Smallmouth Bass, Black Crappies, Northern Pike and Black Bullheads are all non-native species that were introduced. Many other fish species have also been introduced into our state and Yellowstone Park, but failed to survive.

The MTFWP has a priority to manage Native Fisheries first. This can be seen when you look at fish limits. Brook trout limits are 20 fish in many areas, to help eliminate them. Walleye limits can also be large when found in waters designated as trout fisheries, such as Canyon Ferry Lake. Yellow Perch Limits fluctuate from 10-50 fish, depending on the lake and population density.

Identifying fish can be difficult for new anglers. The Pallid and Shovelnose Sturgeon look similar. The Barbels, found in front of their mouth are in different locations. The Pallid’s Barbels are closer to the mouth.

A Sauger looks like a Walleye. The Sauger has spots on its forward dorsal fin while the walleye has no spots on its fins. Their cheeks are also different. A Walleye has almost no scales on its cheek plates. Because of this, many anglers feel that Walleyes are a Native Species and should be managed as such. You can also locate the Fishery Management Plans for every watershed.

Fish identification can be confusing. If you are unsure, watch some YouTube videos or research the confusing fish you may encounter. There are also many bait and forage fish found throughout the state.

We are all Stewards of Montana’s waters. If you witness illegal fish being dumped or water pollution issues, please contact 1-800-TIP-MONT. Illegal dumping of fish, snails, mussels, or other non-native species can impact our fisheries forever.

For more Montana Grant, catch him at www.montangrantfishing.com.