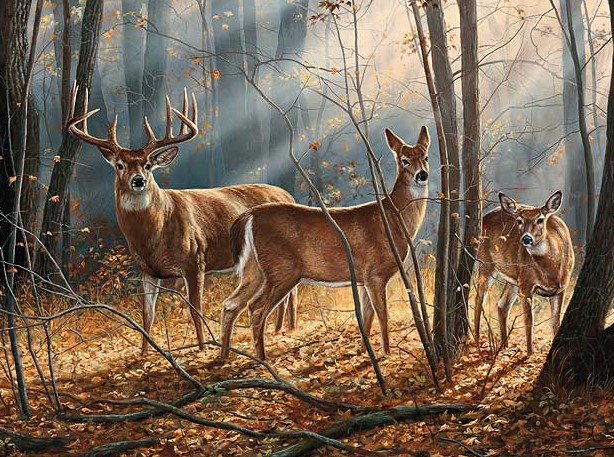 SHOULD DOES WITH FAWNS BE TARGETED?
By Montana Grant

Late season hunts are often for Does or cow elk. In some cases, crop depredation tags are issued by the state to reduce herd sizes in certain areas. Late season deer need 40 pounds of grass a day to survive. Winter wheat, hay bales, and future grass crops can get hammered when deer herd up for the Winter. 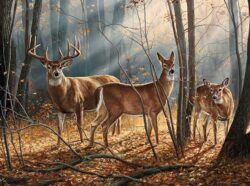 One a hunt a few seasons ago, I was on stand waiting to fill a doe tag. Several deer came in range with 3 large, dominant does. Most bucks have moved away from doe herds after the Rut. Small yearling bucks may still be close to their Mothers along with yearling fawns and does.

Since does breed at different times during a pre-rut, Rut, or Post Rut, births are also staggered. Late births mean small deer, as they survive into the winter.

I noticed that the doe groups contained mature Mothers and pairs of yearling twins. All the yearlings were small. So, what do I shoot?

Does, at this time of year, are no longer nursing and the Fawn’s spots are gone. These yearlings were maybe 60 pounds on the hoof. Once dressed and butchered, you may have gotten 20-25 pounds of meat from them. Is this even worth it?

Most does have been bred at this time of the year. The mothers have guided their fawns through a hunting season and introduced them to life. It takes a doe 200 days, from the time they are bred, until they drop a fawn. These new deer keep their spots for 3-4 months. The small Does that I was looking at were less than 10 months old.

I passed on the shot. If I shot the mother, the family group would be at risk or need to be adopted by another Doe. After harvesting deer for a lifetime, it has become harder to pull the trigger. Antlers and bragging rights do not matter to me. I do enjoy the meat.

It is true that small fawns taste great! Mountain Men and Native Peoples targeted them. Camp meat was about portion size. A small deer would easily fit on a spit for dinner.

The truth is that harvesting small does is fine. Hunting today is about managing a healthy population. Deer multiply quickly. Annual harvest of 50% can still result in an increasing deer population. Whether this deer is your first or most recent, it is Biologically acceptable to harvest a small deer.

More harvested deer means fewer deer to over graze a habitat, less deer on the roadway, and fewer deer feasting on your shrubbery.