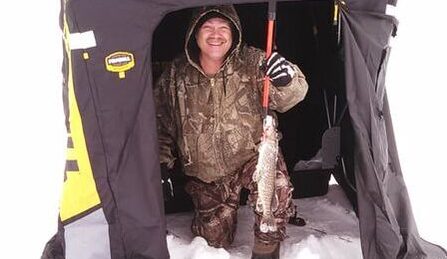 Lake Mary Ronan
6 to 8 in of ice. Good perch fishing out in front of State Park and Mountain Meadows Resort. 20 feet of water has been a good depth.Smith Lake
Good Pike fishing for small Pike in the 16 to 20in range use tip ups with small smelt. Perch fishing has been slow but some good fish and 1/2 to1lb range.

​Thompson Chain of Lakes
Lower Thompson has about 7-8in ice on it. Some decent Pike fishing in the shallow bays. A few nice Rainbows coming out off the points. Good perch in 25 t of water on the back side.
Middle Thompson has 2-7in ice on it. A few guys starting a fish it in some of the bays. Getting a few nice Pike and some perch.
Upper Thomson has 6-8in of ice. The upper lobe has been getting some salmon and some decent perch coming out of there.Island Lake
10in ice. Lots of perch in the 7-11in range. A few smaller Pike and occasional Sunfish.

McGregor Lake
Just starting to get some ice on it. Probably next week we should see some fishable ice on the West end.

Bitterroot Lake
Fishing the Northwest corner 6-8in ice. A few nice rainbows and some salmon. The main lake down by the dike starting to get some ice. We heard a couple inches with this cold weather hopefully by this next week should have some fishable ice on the South end

Dickey Lake
5in good ice. The salmon fishing has been good with some fish up to 15in.

Ashley Lake
Starting to get some ice on it. They are catching some salmon in the bays. Pretty thin ice: still looking for maybe possibly next week to get some better ice.

Blanchard Lake (Near Whitefish)
8in good ice. Catching lots of smaller Crappie, Sunfish and Perch. With a few decent Pike going on tip-ups and hot dogs.