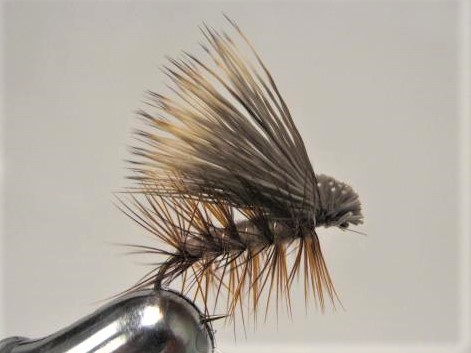 The Elk Hair Caddis can be found in most fly guy fly boxes. This deadly fly works in almost every trout, or warm water, environment. Caddis are abundant and an important part of most fish’s diets. Caddis thrive in polluted or impacted waters. 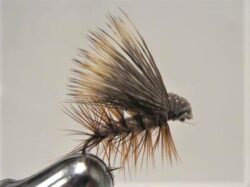 Fossils of Caddis have been found from over 230 million years ago. Ironically, this fly was not invented until 1957. Al Troth, a Pennsylvania fly guy was trying to match a green caddis found on the Loyalsock Creek in eastern Pennsylvania. He was looking at making the fly an emerger. The palmered hackle looked good so he gave it a try.

Later, the fly was modified to become the Letort Cricket. The most important part of the fly is the shape. The classic triangle silhouette is what the fish see. Body color is also important.

One season, along the Yellowstone River, at what was Buffalo Ford, caddis were everywhere. I was throwing every caddis I had at the rising fish and was just getting refusals. They wanted a gold or yellow bodied caddis or nothing at all. I finally caught a trout on a nymph and found 2 yellow bodied Goddard Caddis in his lip. After a bit of desiccant powder, the flies were back in action and so was I.

The thing I did not like about the Caddis was how it floated high. I also hated palmering the body hackle. I was playing around on the vise and did not add the palmer body hackle. To compensate for the lack of floatation, I added a poly shuck for the tail. It seems that most trout will target a cripple. The shuck mimics an exoskeleton still attached to the body. The X-Caddis was born.

I mainly use the X-Caddis as my terminal fly. The upper Caddis is a high floater variant. A standard Caddis or a Goddard float like corks and make for great indicators. They also work well when using a terminal emerger pattern.

If you are a fly guy without a Caddis inn your box, you are missing out!

For more Montana Grant, find him tying at www.montanagrantfishing.com.