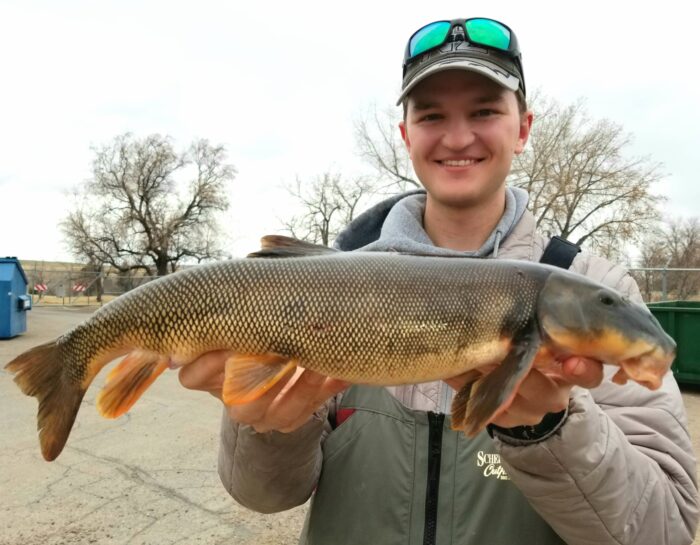 Great Falls angler lands state record longnose sucker
For the fifth time in less than a year, Montana will add a new state record fish to its books.
The latest fish is a longnose sucker from the Missouri River caught on March 26. Weighing in at 3.42 pounds, the 20.1-inch sucker was landed by Jacob Bernhardt of Great Falls while fishing in Cascade County. Bernhardt’s fish broke the previous longnose sucker record of 3.27 pounds, set in 1988 with a fish caught from the Marias River.
Other recent state record setting fish include a Chinook Salmon caught in August, a Smallmouth Bass in October, a Yellow Bullhead in December, and a Brown Trout in February.
The sucker family is the third largest family of fish species in Montana with nine species, behind only the minnow and salmonid (trout) families. Longnose suckers are native to the state and widely distributed across nearly all of central and western Montana.
With a total of 91 native and introduced fish species found in Montana, interest in fish records has increased in recent years. Montana Fish, Wildlife & Parks maintains the list of record fish, and it is available on FWP’s website at https://fwp.mt.gov/fish/anglingData/records
Anglers who think they may have caught a state record fish should keep the following things in mind:
•To prevent loss of weight, do not clean or freeze the fish. Keep the fish cool—preferably on ice.
•Take a picture of the fish.
•Weigh the fish on a certified scale (found in grocery store or hardware store, etc.), witnessed by a store employee or other observer. Obtain a weight receipt and an affidavit from the store personnel if no FWP official is present. Measure the length and girth.
•Contact the nearest FWP office to have the fish positively identified by a Fisheries Biologist or Manager.